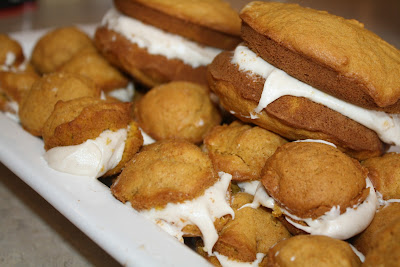 Remember yesterday when you used half of a can of pumpkin to make mini pumpkin cheesecakes? 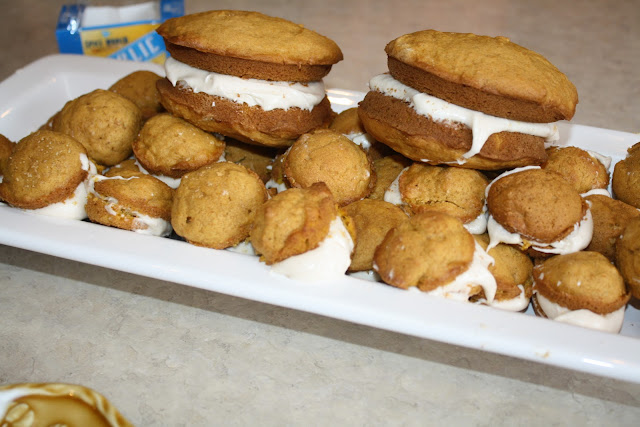 Well today I'll let you use the other half of the can of pumpkin......that is unless you made TWO batches of mini pumpkin cheesecakes! In that case, you will need to open a new can of pumpkin. This recipe is for Pumpkin Whoopie Pies! Oh my!! 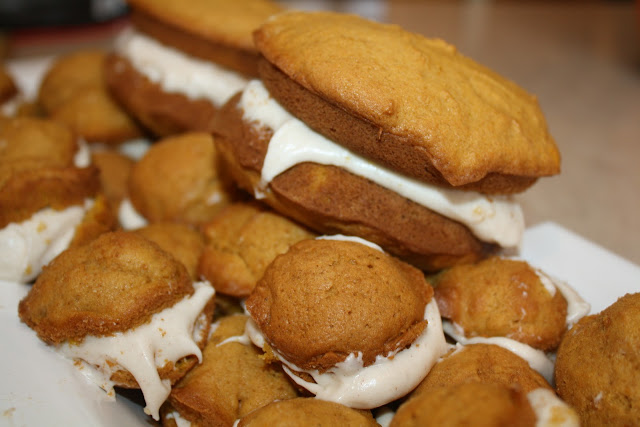 And to be quite honest with you, I was trying to make several recipes to use for this week. But, I had somewhere I had to be and I was running short on time. My pan that I used for my whoopie pies only lets me make six whoopies at once (which translates in to three pies)...so in the interest of time, I put the rest of the batter into mini muffin pans. (No, not the mini cheesecake pans, just regular mini muffin pans. Then when they were done (and cooled), I split them open and put the filling in them, making them mini-muffin-whoopie-pies! Oh my! And, actually, they were quite the hit. I guess it is another "necessity is the mother of invention" ideas. People liked them that they were bite sized and could be popped into their mouth. AND, just a pop here and a pop there and they don't realize they have eaten as much as....or even more!!!!....than a regular-sized whoopie pie! Oh my!! 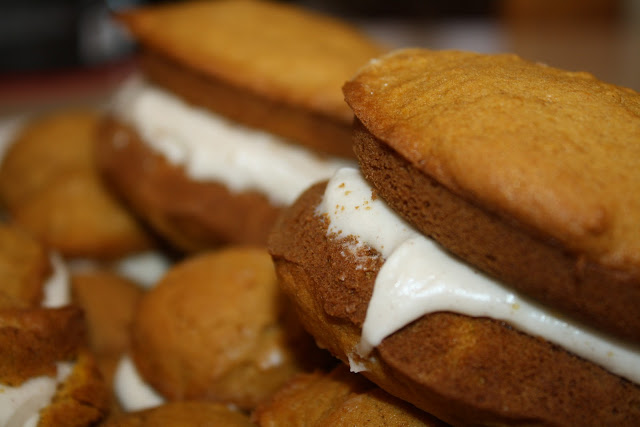 And, you can tell from the pics, that I was in a hurry. I slathered that cream filling in the middle as fast as I could. I will be more precise next time. BUT it certainly did not stop anyone from eating them! Pictured above is one of the larger Whoopies! I used a specific pan to make the big Whoopies. I am sure you could also just blob the dough down as in cookie dough and use that as well. Like I said, the mini whoopies are from a mini muffin pan. I will give a link at the bottom of the recipe for my Whoopie pan. The recipe is quicko quicko. They are meant to be fast and easy and ready to eat in a short amount of time. As always, enjoy!!  Enjoy!!
For the Cakes:

2 teaspoons of vanilla extract
For the Cinnamon Cream Cheese Frosting:

1 tablespoon of milk
To Make the Cakes:
Preheat oven to 375 degrees.
Mix together butter, sugar, and brown sugar until thoroughly combined and fluffy; about 3 minutes. Add eggs, one at a time, until they are mixed well. Add vanilla and pumpkin until combined.
In a separate bowl, combine flour, pumpkin spice, baking soda, salt and baking powder.
Sift and stir into the pumpkin mixture until combined.
Put two large tablespoons of mixture in each of the places on the whoopie pan OR
On a parchment lined baking sheet, drop two rounded tablespoons of the pumpkin mixture. OR
use a mini muffin pan!!
Bake for 11-13 minutes until cake bounces back to the touch.
Cool on baking sheets for 3 minutes and move to cooling rack to cool completely.
To Make the Frosting:
Beat together cream cheese, vanilla, and butter until mixed completely.
Slowly add powdered sugar until incorporated with cream cheese mixture.
Mix in cinnamon and slowly add the milk until filling is light and fluffy.
Put the filling in on the bottom of one whoopie pie and put another whoopie
on top for a whoopie pie!
OR
split your mini muffins and do the frosting overload!
That cinnamon in the frosting is SO good!

Whoopie Pie Pan (mine only holds six. I really need this one. It is double the size!)

Labels: FEAST your eyes and stomach..