When the wind comes sweeping down the plains...

OOOOk-lahoma, where the wind comes sweepin' down the plain,

And the wavin' wheat can sure smell sweet, When the wind comes right behind the rain.......

If you saw Oklahoma on the news at all today it would be about the tornadoes hitting our fair state last night.  At last count (they were still determining if all were "true" tornadoes) there were 36 that touched down somewhere in the state. No part of the state was spared. From border to border we were not just "Tornado Alley" last night, we were "Tornado Destination".  The tornadoes were accompanied by large, destructive hail. 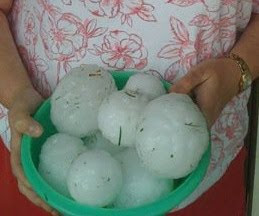 This is an actual picture of hail storms from last night's storm. (About 60 miles from where I live.)
Hail stones ranged from golf ball size to grapefruit size hail.
Yes, we Okies do get somewhat 'use to' or expectant
that we will have horrific weather in the spring.
It's an unfortunate side-effect of living here.
With that in mind, it might help explain the next story.
Almost six years ago (when we still lived in northern Kansas), a fierce thunderstorm came up during the middle
of a July afternoon.
My two youngest sons were playing
Legion baseball
and the game was called because of
the weather. 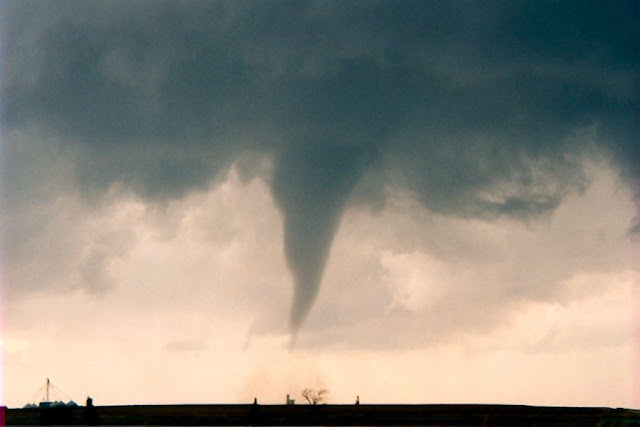 Most of the baseball team made their way to our house. There were also a few girlfriends of some of the boys there, along with my husband and myself.  Not too long after getting home the storm took a wicked turn.

It rained so hard it was raining sideways.  Then the rain stopped. In Oklahoma we know that if it is storming badly and then suddenly stops, that is not good. (Although last night's tornadoes in Oklahoma were wrapped in rain, and that is why some people were unprepared). OK, back to my Kansas story.  So the rain stopped, but the wind was still blowing.  Then it began to thunder and lightning.  Very little rain, but LOTS of thunder and lightning.  Then the tornado sirens began to blow.

My hubby, who gets a little scared of tornadoes who is much wiser than me, said that we needed to get the large group of teenagers that were at our house into our basement.  After all, we were responsible for them while they were at our house.
I told him to go ahead and take the kids into the basement and I was going to check outside and see if I could actually see the tornado.
Once I said that, there were several teenagers that wanted to go outside with me.
Hubby was adamant that no one was going outside while the tornado sirens were blowing.

I didn't listen. (If you know me well you were not surprised by those three words.)

We always kept an American flag flying at our house. I watched as the wind pulled the flag from the porch and hurled it across the yard. We had a wonderful yard full of huge maple trees. Our house was surrounded by the trees. 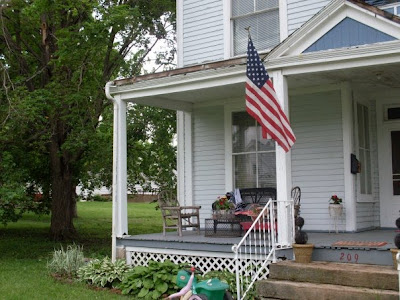 I went outside to save the flag.
My hubby yelled at me to get back in.
I didn't listen.
I am very very very very very bull-headed.
I was just going to go out, grab the
flag (with the metal pole)
and run right back in.
I was barefoot.
Luckily, I did not have on a single piece of jewelry.
(I take off all jewelry in the summer because of my swimming/tanning obsession, including my wedding ring. I know. I know. How rude of me.)
I bent down to pick up the flag.

And then it hit me.
Lightning.
It put me flat on my back.
In about a micro-nano-second.
With a houseful of teenagers and one mad hubby watching.
All I remember was the sound.
It was deafening.
Really.
It was so loud that it was like something exploded
inside
my head.
I hurt.
All over.
BUT
I could hear my hubby scream.
I think he wanted to say, "I hope you are still alive, so I can kill you!!!"
(Just kidding.)
But once he saw I was alive,
he. was. mad.
He ran out into the yard to help me up.
I hurt all over.
My ears, feet and teeth hurt the worst.
I got into the house and I could feel my heart racing.
Literally.
I mean really literally.
It was beating way too fast.
My hubby took me to our room to put me on our bed.
I barely got in there and I felt sick.
I made it to the bathroom.
(sorry, but it will now become graphic for a second)
Barely.
And I lost everything I had ever eaten
since the day I was born.
And half of my insides.
Or at least it felt like it.
(and I was not throwing up)
I mean I lost everything.
I guess my insides did not like the
shock and fry
it had just received.
Then, as I sat there on the toilet,
I hear a huge noise when
all of a sudden,
one of our giant maple trees

came crashing through our house.
Right by the bathroom.
It got the bathroom window,
which was about six inches from me.
I screamed for my hubby.
In the meantime, he had heard the
unforgettable noise
of a crashing tree,
and had come running. 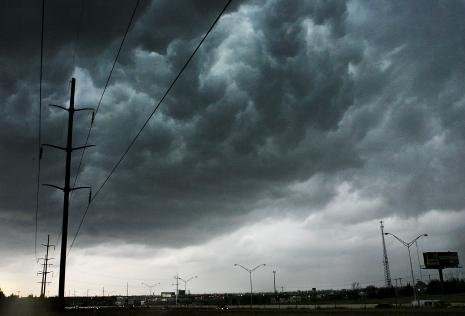 " Lori," he said, "I don't know who your guardian angel is, but you have worn them out."

I ended up being okay. Eventually.
My feet hurt for a while.  I think my teeth hurt because I have a lot of fillings (I came to that conclusion with my pseudo medical degree).
But it was my legs that gave me the most trouble.
For months and months afterward, maybe even years, my legs were hot. AS IN...hot to touch.  They were hot all the time.
I had the hardest time wearing slacks because it felt like my legs were burning up.  I wore a lot of dresses, skirts and capris to work. Even in the harsh Kansas winters my legs would feel hot.
When my legs were under the covers at night, they would heat up the bed like we had an electric blanket on "fry". If I put my legs up against hubby's in bed he would make a sizzle noise....like my legs were frying him.
And it was just another reminder that I went outside during a tornado siren and he had warned me not to.  He liked to remind me of my stupidity bravery in rescuing the American flag that had fallen to the ground.


On a final note of my Lightning Saga:  We found out the day after the lightning strike, that in fact 99% of the TV's on our block had been wiped out during that strike.  There was one TV left working.

Yep, that would be ours.  Or I should say my hubby's pride and joy.  He LOVES his TV.  It was huge and wonderful.  And it still worked.  I like to remind him when he feels the need to lecture me about that day that in fact if I had not taken the hit, his TV could have been toast just like the rest of the neighborhood.

He does not find it the least bit amusing. Still.
In fact when people bring up the July afternoon when I almost met my Maker, hubby still gets mad.
He does not like to even talk about it, much less joke about it.  On the other hand, I think I might have learned a lesson.  For a long time after that I would get as far away from lightning as I possibly could. (And yes, people still call when it storms to make sure I am in the house.)

But last night "when the wind came sweeping down plain" I wanted SO badly to go outside and watch the storm roll in.
The only problem: There was a big hubby blocking the door with this look in his eye like "just try me"......