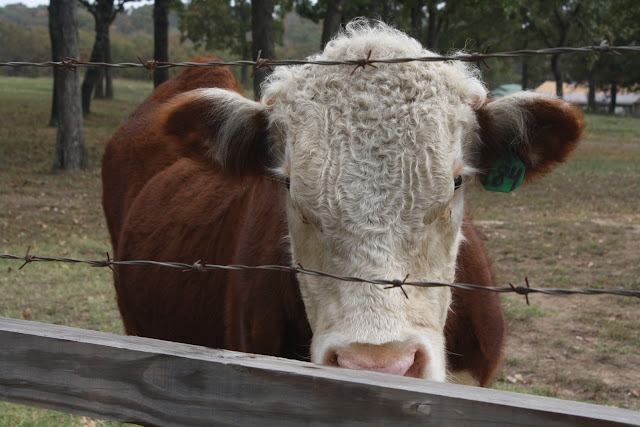 First, it took me forever to get my pictures to load.(I got my kitchen cleaned while waiting!) Then it would not let me switch them around. So, I give up. This post may appear disjointed, but it is because I am using the pictures to tell the story, instead of telling the story and adding pics.  Hopefully, you can follow along!
My rehearsal dinner is over. All those months of planning and wanting everything to be both perfect and memorable and it is over. It is kind of like Christmas.....All the buildup, then it goes by too quickly.
I did make sure that I took the time to enjoy it.  The whole weekend was a very family centered event. It was wonderful.


I work well under pressure. I do well because I am one of those procrastinators. I have had a lot of practice working well under pressure!  In the case of this rehearsal dinner though, I was well organized. I booked my Chuck Wagon man and his crew clear back in early July.  I checked in with him several times.  I talked to him last week once again. We had talked about the "off" chance there might be rain at the party. We had a Plan B.
To give you a little background info, my Chuck Wagon man is booked every single weekend doing his little gig. Apparently it is a very popular theme. Maybe it is an Oklahoma thing.  One thing that IS an Oklahoma thing is dramatic weather.  We are use to drastic, unruly, not-your-normal-weather.  So when we went from July to October with very, very little rain and the hottest temps on record, we were not surprised.  What did surprise me was that they put rain in the forecast for our rehearsal dinner and wedding week. WHAT????????????????
The weather men wavered all week about the weather. Some put rain at 20 % on our rehearsal dinner day and some put huge thunderstorms at 80% on that night. One day they had us at 50 degrees, one day they had us at 80 degrees. I finally just quit checking the weather. It was too much. I figured we would have it no matter what, so it wasn't doing me any good to worry.
The Chuck Wagon man was cooking everything over the open fire. Even the dessert.  I just had to provide all the paper goods.  I had already decided to add a S'more bar and a few extra desserts.  I had found great paper goods at several different stores. It seems like those things came together easily.

We had Fall Break from school on Thursday and Friday. That worked out perfectly.  I had planned to use it to get last minute things done, then have the rehearsal dinner on Friday evening.  That's before I got The Call on Thursday afternoon.  Thursday afternoon as in 24 hours before my dinner for 60+ people.
Twenty-four hours before my Big Dinner, Mr. Chuck Wagon called.  He wanted to know what my plan was for the bad weather that was forecast.  And I will admit the weather forecasters were painting a bad scenario. They had severe thunderstorms, strong winds, lightning, and possible tornadoes in the forecast.  The problem was, that in Oklahoma we usually don't get too worked up about the weather until it is on top of us. Literally.
So when Mr. Chuck Wagon asked me what my plan was for the bad weather I was kind of caught off guard.  I reminded him that we had said I would just get him an open-sided tent to cook under and we (the party guests)  would eat inside the barn, instead of outside.  He said he didn't think he could cook in the bad weather. (Cue Charlie Brown disaster music here). My daughter was beside me as I was taking the phone call and she had quickly figured out what it was about. She told me to ask Mr. Chuck Wagon what cowboys in the "old days" did about rain!
He told me that he just didn't feel comfortable cooking in the weather that was forecast, even with a tent. I could not believe it. I asked him to wait till Friday morning to make his final decision, and he said he would.
In the meantime, I talked to my husband who was at the barn (2 hours from our home) cleaning and putting in hay and tables for everyone to sit. We figured we would go ahead and set everything up inside "just in case".  He too was shocked that someone could cancel something like that the day before, without any kind of warning.  My husband said what I was already thinking...."We'll just do it ourselves."  We were both very calm about it.
By that time it was late afternoon/early evening on Thursday. My daughter and I decided to go into town to get hamburger meat for the chili we (decided) on making. As we were driving in to town, we saw a bad one-vehicle wreck.  The SUV had hit a utility pole and knocked it down. The wreck had just happened as there were no rescue people there yet, only one patrolman. I remarked to my daughter off-handedly, "That means our electricity is probably out now." Then we drove on in to town and bought 5 large rump roasts and 32 pounds of ground beef....among other things.
﻿ ﻿Sure enough, when we arrived back home our electricity was off and would remain off for about five hours. We tried to find other "prep" things we could do without electricity so we would be ready to go once we had it again. We drove by the wreck again to check out the progress and they were just drilling to put a new pole up, so we knew it would be a while.
﻿ ﻿ We got our electricity back just as darkness set in. We then started browning the hamburger meat and baking desserts. We worked fast and furiously. We also had to pack up all the decorations. The items we were transporting (for our two hour trip) more than doubled once we had to transport all the food as well!
﻿﻿ ﻿﻿﻿﻿﻿Friday morning arrived and I expected Mr. Chuck Wagon to call....like he promised he would. But he didn't. I called him and he said again that the weather forecast was just too bad. He did not want to risk it. I pointed out that it was not raining yet, but he was firmly set on his decision!
﻿ ﻿ It was fine though, because by then I already had 15 pounds of hamburger meat cooked, and 5 rump roasts in the oven (for the stew meat). I also had a LOT of dessert made.
﻿ So we loaded up all the food and all the decor and headed to our party. We had a full car of decorations before we loaded it down with food too. We ended up taking two cars full ....and they were packed to the brim!
﻿﻿ ﻿﻿
﻿﻿ ﻿﻿
﻿
﻿ ﻿﻿People loved the s'more bar. There were lots of new inventions and creations for s'mores. It also got people up moving around and coming outside.  In addition to the s'more bar, we had huge round bales of hay outside that entertained many in the crowd. 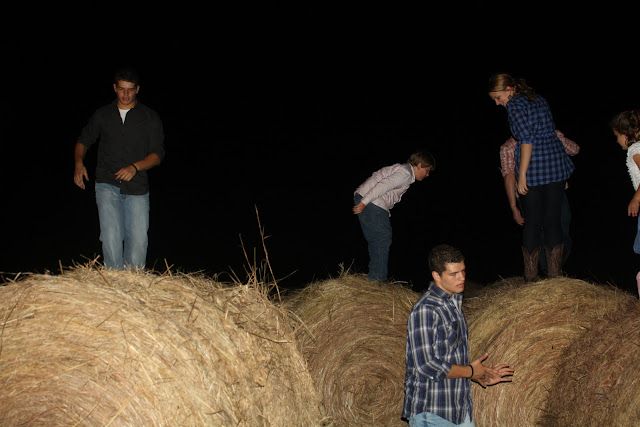 ﻿﻿ ﻿﻿All the young people and a few not-so-olds played on the hay bales. There were hay bale jumping races, longest leaps and three falls.  Everyone was fine though and got right back up. 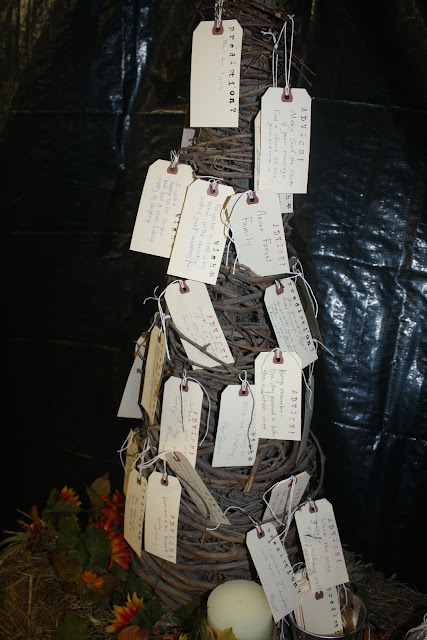 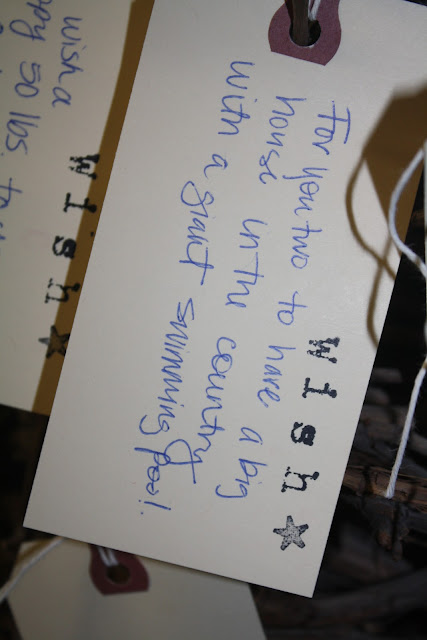 Another idea  we used was (shown way up earlier) a choice of ADVICE, WISH, and PREDICTION cards to fill out. Caroline made sure everyone wrote at least one of the cards for the Happy Couple.  Then she hung them all on the tree, for others to read and for the Happy Couple to take home.
﻿ ﻿
﻿﻿ ﻿﻿After all the drama of the meal, everything turned out wonderful and went off without a hitch. And best of all, we did not get a single drop of rain. Not one. Not even a sprinkle. And I saved myself some serious money!!
The food was great, the party was better and the fact that we had close family members together to honor the Happy Couple was the best. 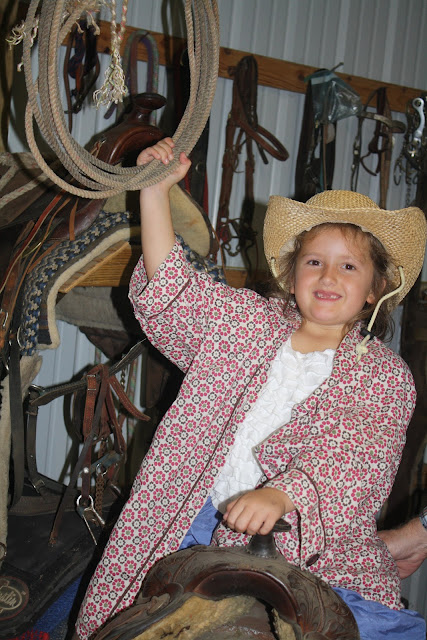 I stayed calm throughout the whole ordeal. (When someone leaves you a covered wagon picture in the trash, you know you're being looked out for!) Actually I was much calmer then than I have been trying to get this post out and fixing all the trouble I have had with Blogger today!
It was a night to remember for a very special couple!!