At first I thought twice about posting this on my blog.  But I have set no parameters about what the blog is about.  I did say on the header there would be family stories...and hence, my first family story!!
As you will see, this is a post about the stubborn family trait.....of stubbornness!  It is how those of us with that trait look at it and how it affects our life.  It is also about my Uncle Jo.  My Uncle Jo truly was larger than life to me, even as an adult.  Sadly, he is not expected to live through the night. So consider this a little family tribute! 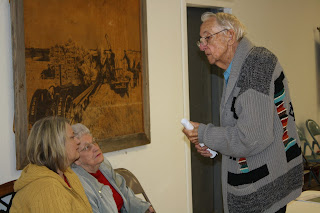 When I first went to the hospital to see Uncle Jo he was in ICU. I stopped at the nurse’s desk to make sure it would be fine for me to visit. I asked the nurse which cubicle he was in. She gave me a funny look and said, “You mean David Ferguson?” I smiled and nodded. David Jo Ferguson. So of course, they had him listed as David Ferguson. My smile was because to me, he is and always will be, my very, very special, Uncle Jo.
A couple of weeks ago I went to see him and took all five of my own children with me. This time HE smiled. He grabbed his pen and notepad and scribbled out the words, “Who would have five kids?” I replied back, “Only people that are half-crazy!” He nodded and wrote back to me, “Don’t ever let anyone tell you it is not GREAT to have five kids!!!” I looked him in the eye and said, “I agree. But there are only very few people these days that know that secret!” He wrote back, “You and me!!!!”
We know we're right. Uncle Jo and I are stubborn that way!