Sometime after 2012 was underway (I do not remember the exact day, but I wish I did!) my middle son came home one day and announced that he was going to run the Memorial Marathon.  I acknowledged it by saying something like, "That's great Coulter, but you should really just try for the half marathon." 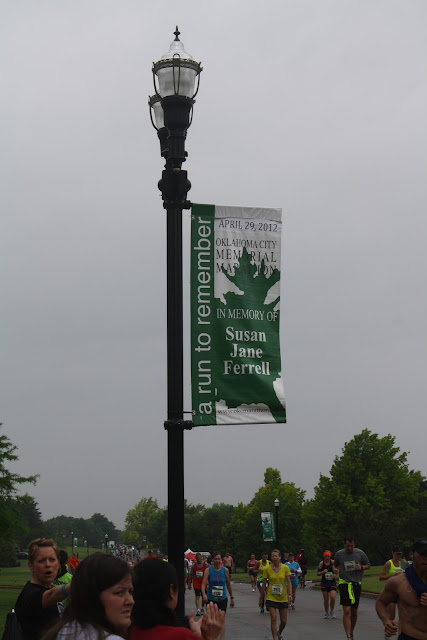 You know if you have read this blog at all, that through the years I have gone to literally thousands of ballgames for my five children. We are huge proponents of organized extra-curricular activities, but I thought the idea of announcing one was going to run a 26.2 mile marathon a few months before doing so was a little preposterous. Especially since it was Coulter. 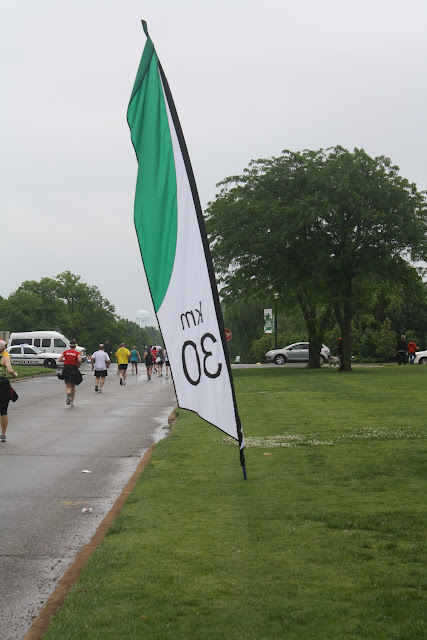 Don't get me wrong. Coulter is an athlete. One look at him and there is no denying that. .....BUT Coulter is a former college football offensive lineman. For those of you that are not sure about what that means, picture the big brutes. The huge ones. The ones that their sole purpose is to protect the quarterback. (i.e. Michael in the Blind Side) Now you're getting the picture, right? Big, huge, strong body. Not the typical long, lean, lithe runners one imagines running marathons. 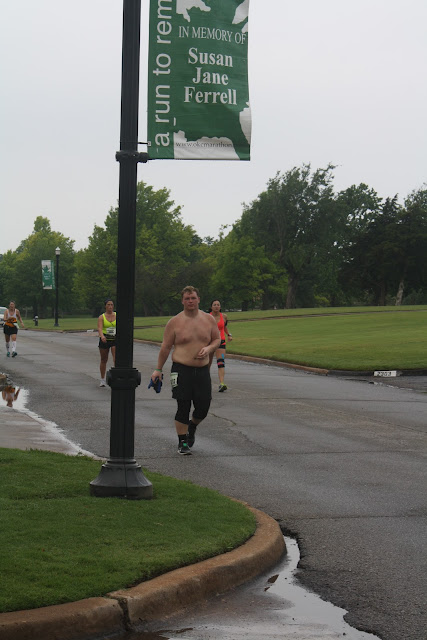 As the weeks of training went on, I still insisted to Coulter that he should try for the half marathon. I told him that 26.2 miles was WAY too much pounding on his body. I told him his knees and ankles and feet and back would never hold up to the training OR the real race. He kept training. 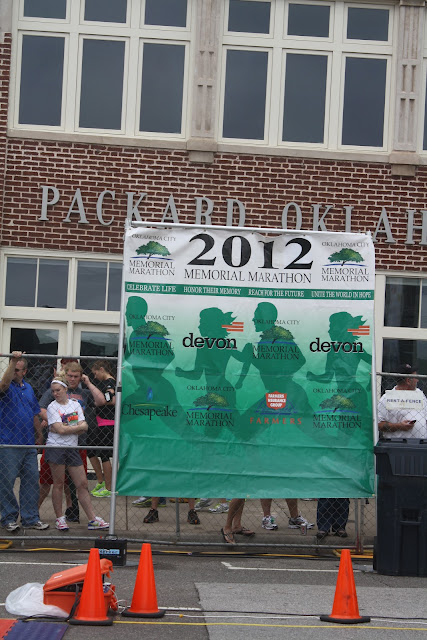 I should never have been surprised. Coulter is a determined kid. (He turned 24 the week of the Marathon, does that still qualify him as a kid?) When he was finally through playing football, he took it upon himself to shed his football-bulk. He dieted on his own, the true healthy-eating way and shed 90 pounds. He is still massive, but it is pure muscle. When he was in high school he had his shoulder operated on and during the (very long) operation, something with the anaesthesia went awry and he lost complete hearing in one ear. It damaged the nerves in that ear and he will never be able to hear out of that ear again. While that is tragic for anyone, it happened to be the ear that was closest to the (football) center (the one that hikes the ball to the quarterback), so that Coulter was no longer able to hear the hiking count. That isn't good. Coaches don't tend to like it if the offense jumps before the play begins. So since he could not hear the quarterback barking the hiking count anymore, he taught himself another way to know when to shoot off the line. Clearly, the boy is determined. "Where there's a will there's a way." "You've got to have heart." "It's in your head." All cliche's for Coulter. 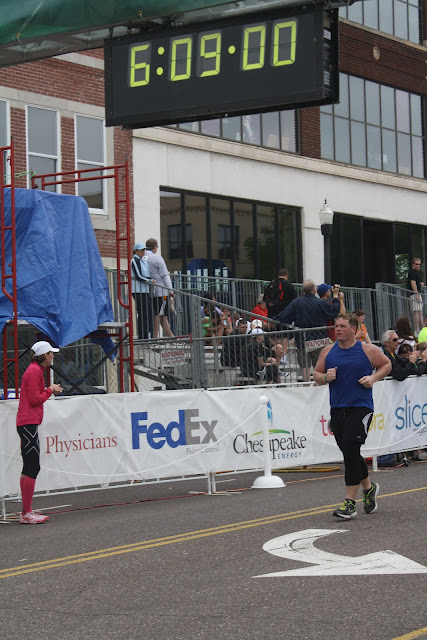 I didn't even mention that during his baseball and football days he (medically) overheated twice. We had to watch him like a hawk for years about overheating. And this spring (so far) in Oklahoma has been very, very summeresque. (Hot and humid). As luck would have it, it was mostly overcast that day and the heat did not set in till the end of his race. 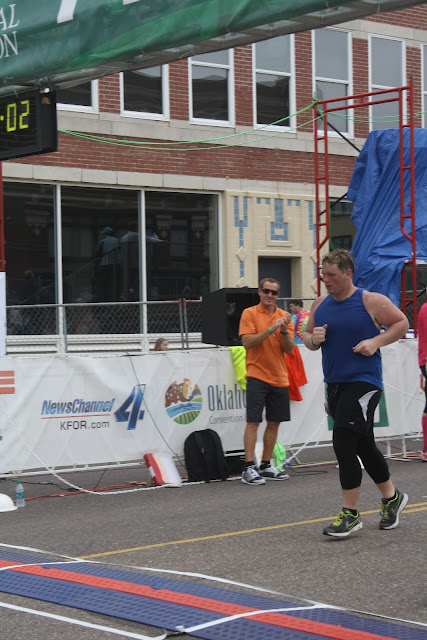 But there he was, six hours after he began, running (yes, still running) across the finish line after 26.2 miles. He had predicted to us that it would take him six hours. Really. Can you imagine running continuously for six straight hours? 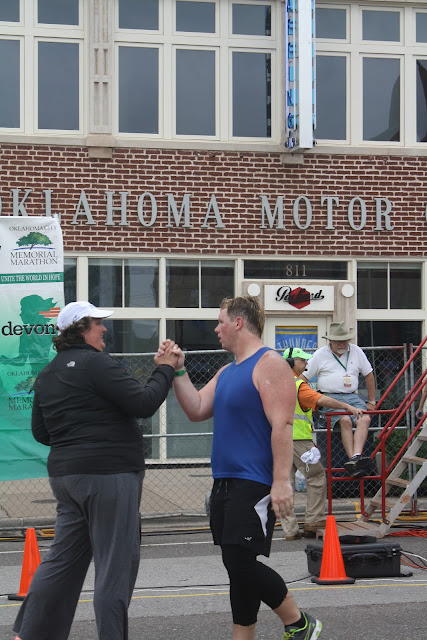 Oh my gosh. I thought my heart would melt with pride. 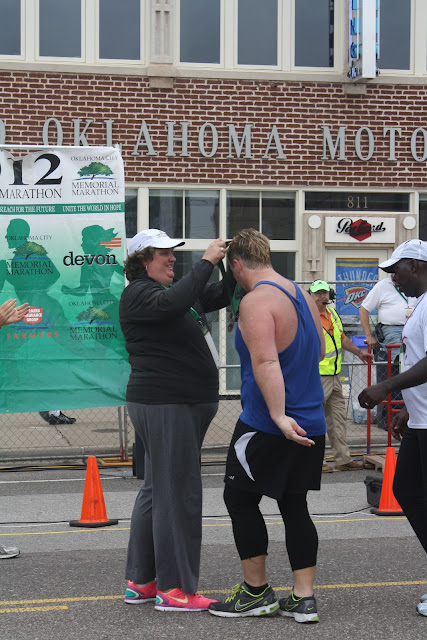 My sister, who runs the OKC National Memorial, was at the finish line to present him his metal. She was bursting with pride too. One of my daughters, a couple of nephews and a niece have run the half-marathon before, but no one in our family had ever run the full. 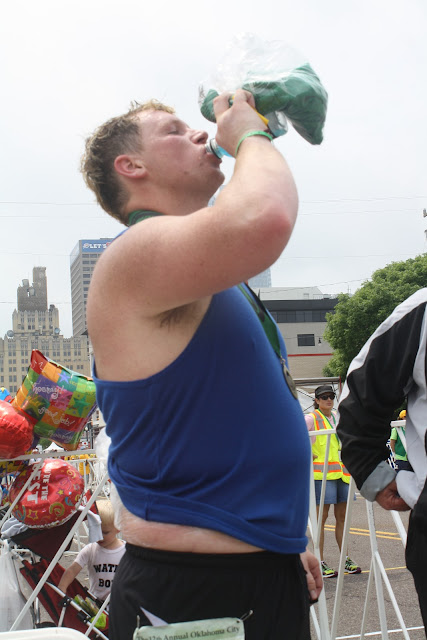 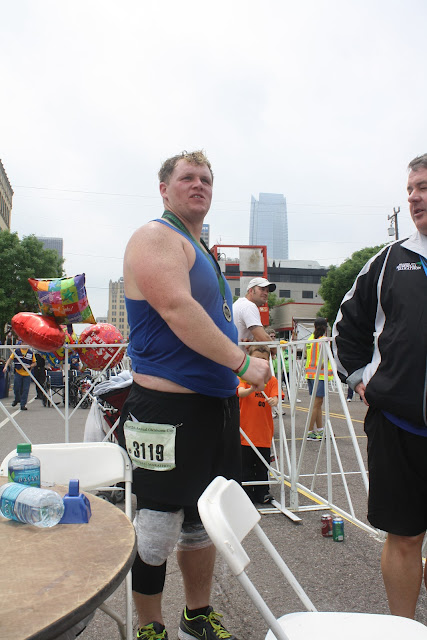 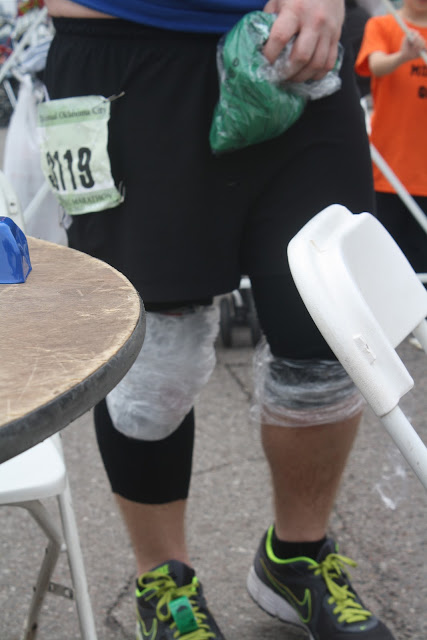 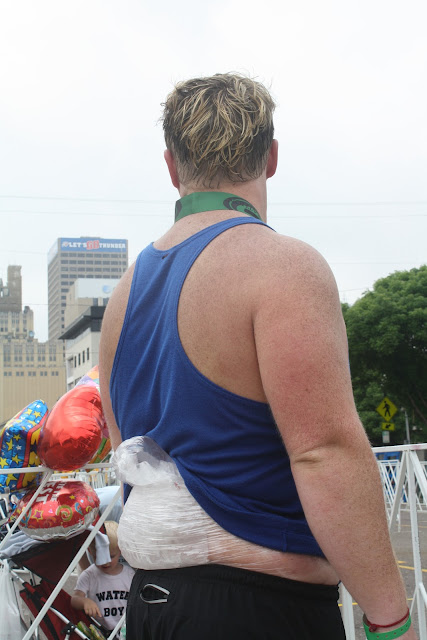 The medical team that waits at the end of the race, iced his joints up. (The very ones I thought would get so pounded.) Other than that, he was fine.
This is just part of the fan club he had waiting for him at the end. In fact, my niece (in the black tee) found him at the 30K (18.5 mile) mark and ran beside him for a couple of miles. He said it was just the encouragement he needed! 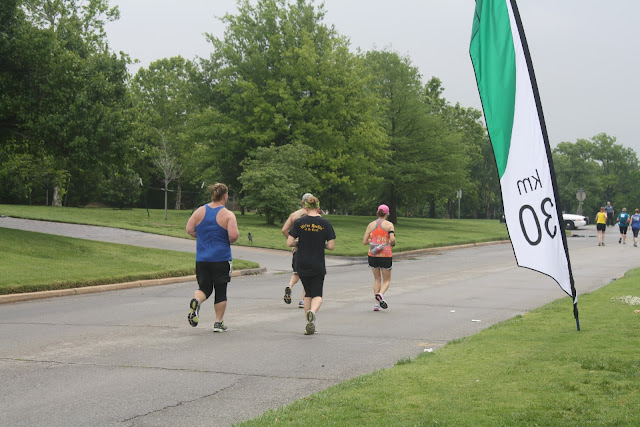 After the race, he sat in the swimming pool for a while. He said the cold pool felt great. We then took him out for a late lunch. The next day he had work and semester finals at school. He made it to both. 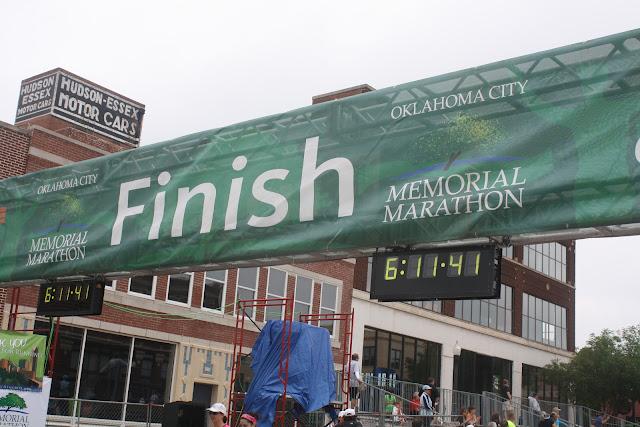 It was a wonderful day.

It has been a week since the race, and I asked him now that he has had a week to reflect if he would do it again next year. I assumed it would be an emphatic NO!!!....

But you've heard that other cliche' before haven't you?  The one about assuming?  Well that one applies as well. Coulter is thinking about doing it all....again!