We have lived in our new (old) house for almost a year now. I have tried to figure out if we got more done in a year than we figured we could...or less.  I still haven't decided. I do know that I am not disappointed in what we have accomplished. And I do know that I look forward to turning many, many more of my ideas into reality. It's funny how we made a (giant) list last year when we moved in about things we wanted to do. In our minds we prioritized that (giant) list.  THIS (the picture below) was not on the hard copy list, or the list that runs through my mind! 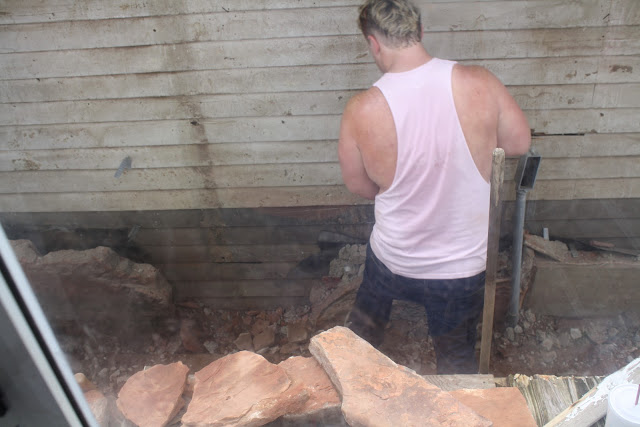 This is my son Coulter taking the rocks (or boulders) off of our garage.  Here's the deal:  Our house is a big two-story white farmhouse. To the south of us is a small sandstone rock house. To the east of us (we sit on a corner lot) is a small sandstone rock house. The realtor told us that 100 years ago the two rock houses and our house were all part of the same property. We are guessing that hired help lived in the two small rock houses. 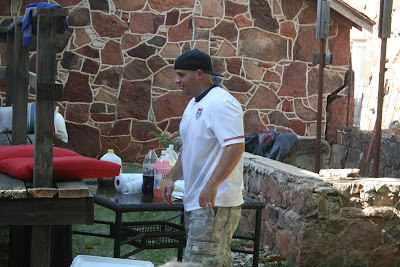 In between the rock house that is behind ours (to the east) is our rock garage. (Pictured above). People always assumed that our garage went with the little rock house, since they were clad in the same sandstone. (Notice we also had a who-know-what-for-rock-halfwall in the middle of the yard as well. That is long gone now too.) 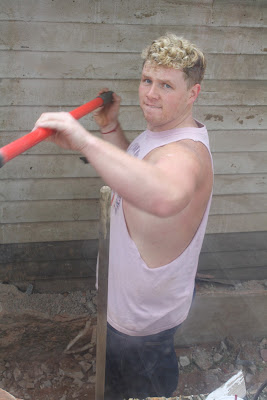 (Yes, he is trying to poke me with that for taking his picture!) Anyway, one day when we were outside I casually mentioned that Hubster and I had pulled some of the cement out from between the sandstone on the garage and looked to see what was underneath. We found wooden clapboard under the heavy (and huge) sandstone. 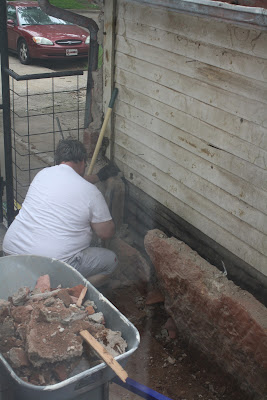 The next thing I know my son has a shovel, a sledgehammer, a crowbar, a metal pole and a regular hammer and he is taking down the rock on the garage. I go inside and get the Hubs to get outside before Coulter kills himself hauling the rock. (Look at the size of the rock in the pic above.) So, we are in the midst of a very unplanned renovation. Obviously the garage will have to be power washed and then we will paint it this summer. There will be no mistaking which house it belongs to after that!  And all that rock....(literally TONS of it)...Well it is destined to line flowerbeds, a mini vegie garden and hopefully a (very rustic) flagstone sandstone patio out back.  The big rock above is going to be a bench.....We even found one rock in the shape of Oklahoma! 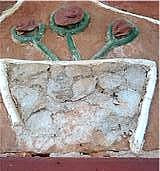 This cute little piece will find its way to one of the flower gardens at the front of the house. When Coulter gets on a roll (he rocks and rolls...get it????) there is no stopping him. Sometimes the best laid plans...are interrupted..and rocked!
p.s. The garage really does look so much better defrocked!