Everything AND the Kitchen Sink 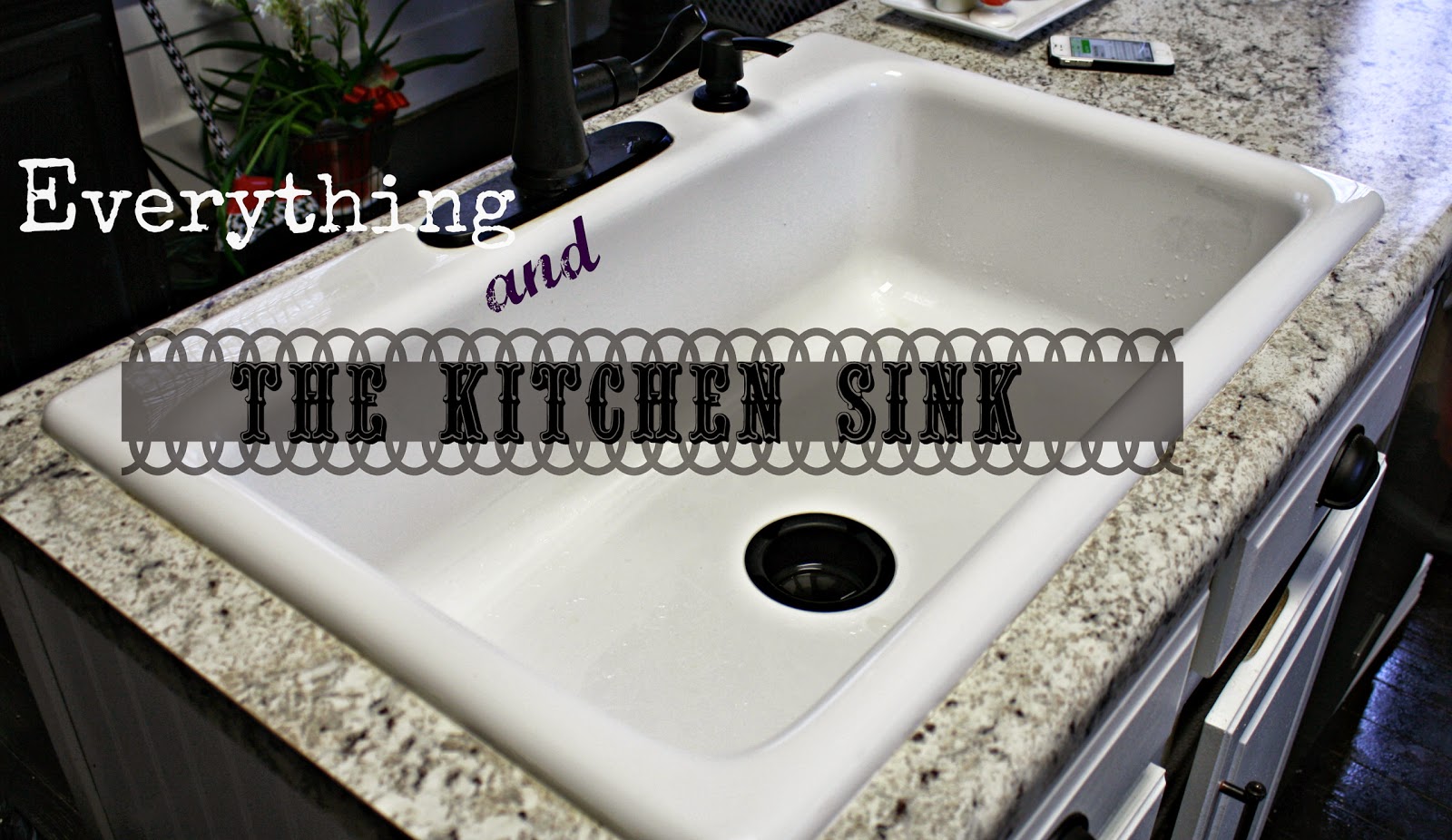 I'm not sure how many pictures a person can look at of a kitchen sink; or for that matter, if it is worthy of a single pic! But, I LOVE my new kitchen sink and felt it was worthy of its own post. 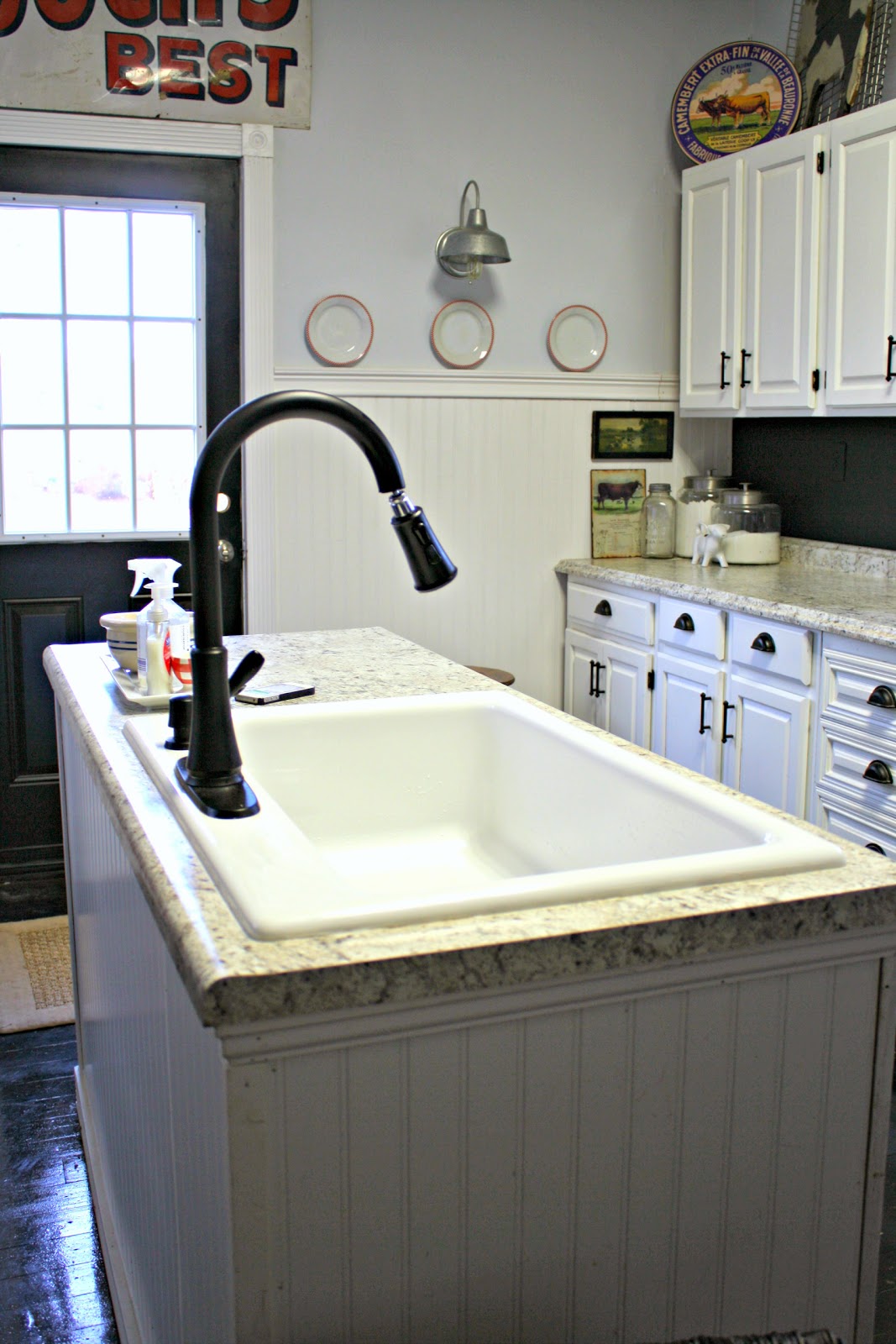 My new sink is even in its own island. Well it has to share the island with the dishwasher, but the sink still manages to be the star of the kitchen. 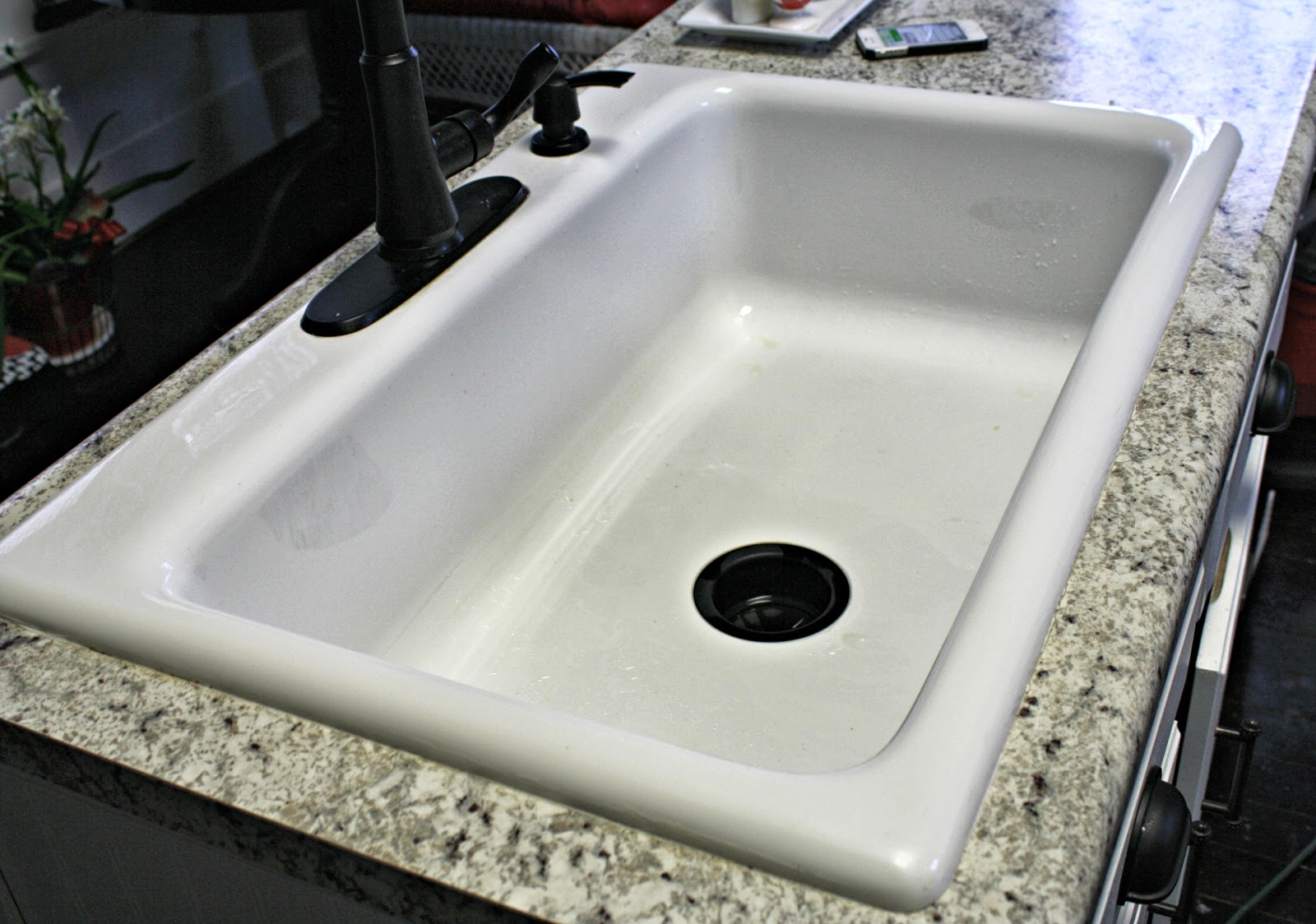 Who would have thought the most used item in the kitchen would make me so happy? Let me just say that I went from the World's Smallest Kitchen Sink to the World's Biggest Kitchen Sink (all in my own mind you realize). Just look at the size of the sink though! 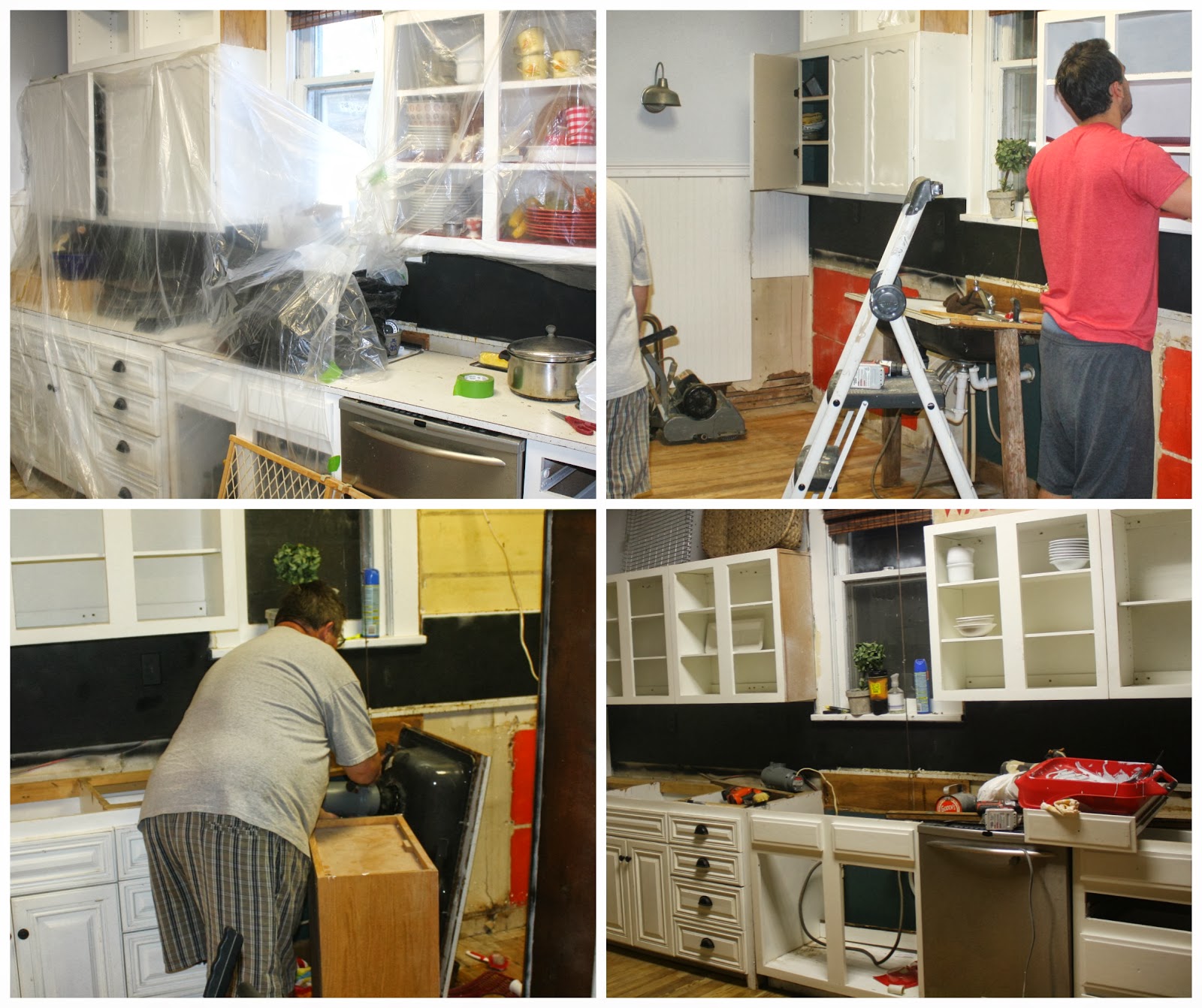 One day I will do a post on the whole kitchen remodel, but I'll give you some highlights (or lowlights I'm sure the Hubs would say). When we moved into this house two years ago, the only thing in the kitchen were four cabinets (two upper and two lower) and a kitchen sink. The sink was an old (very-stained) white cast iron sink, double-bowl-no-garbage disposal and all of 5 (yes 5!!!!) inches deep. It was also only 22 inches wide. No typo's. You could basically get a couple of plates in it to wash them off...if you tilted the plates sideways! We started taking the kitchen apart one night, completely unplanned. In the pics above you can see where we are in the midst of taking the kitchen apart and putting the new kitchen back together. In the first three pics, the mini-sink is still hooked up so we could continue to use it, right up until we replaced it. Then if you will notice the fourth picture, the new sink base is in and it is ready for the new (and MUCH improved sink). I can't find a pic where we actually had the new sink in, but do have one somewhere. We (as in Hubs did the work and I told him what to do(!!!!)). Anyway, the sink was all the way in, but (luckily) we had not had the counter tops cut yet....and I looked at the new kitchen and it was wonderful...and I turned to the Hubs and said, "Ummm...How much work would it be to put the new kitchen sink right here (as I pointed to where the butcher block island was)...and make the island our new sink and the dishwaher?" (You can see where the dishwasher was already in above as well. 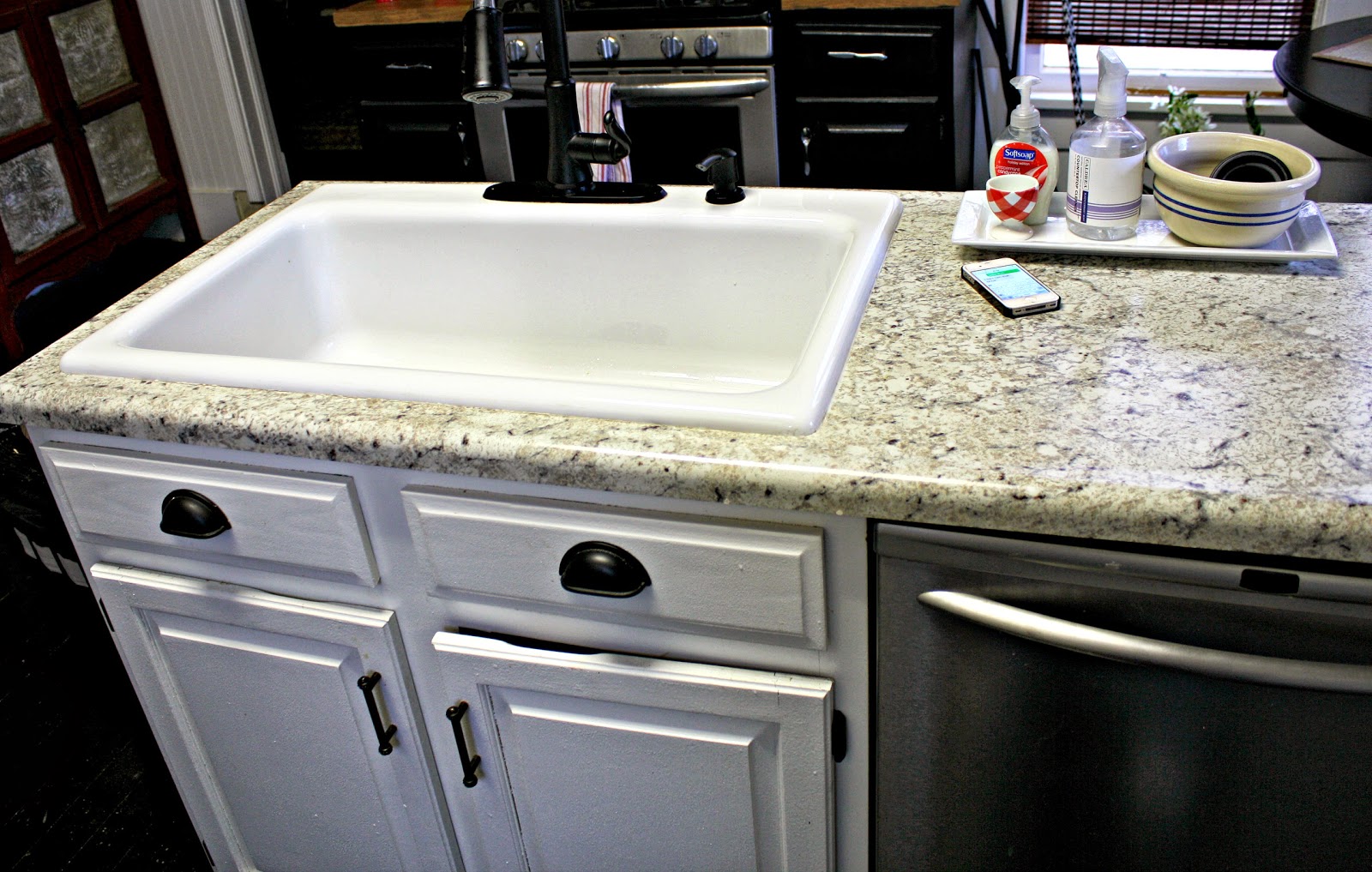 The Hubs looked at me and never even attempted to strangle me, beat me over the head, or duct tape my mouth. He just (calm as could be) answered, "It wouldn't be hard at all. It will just take a little time." I'm not even kidding. He had it ALL the way installed on the other wall and I asked him to move it. And he did. 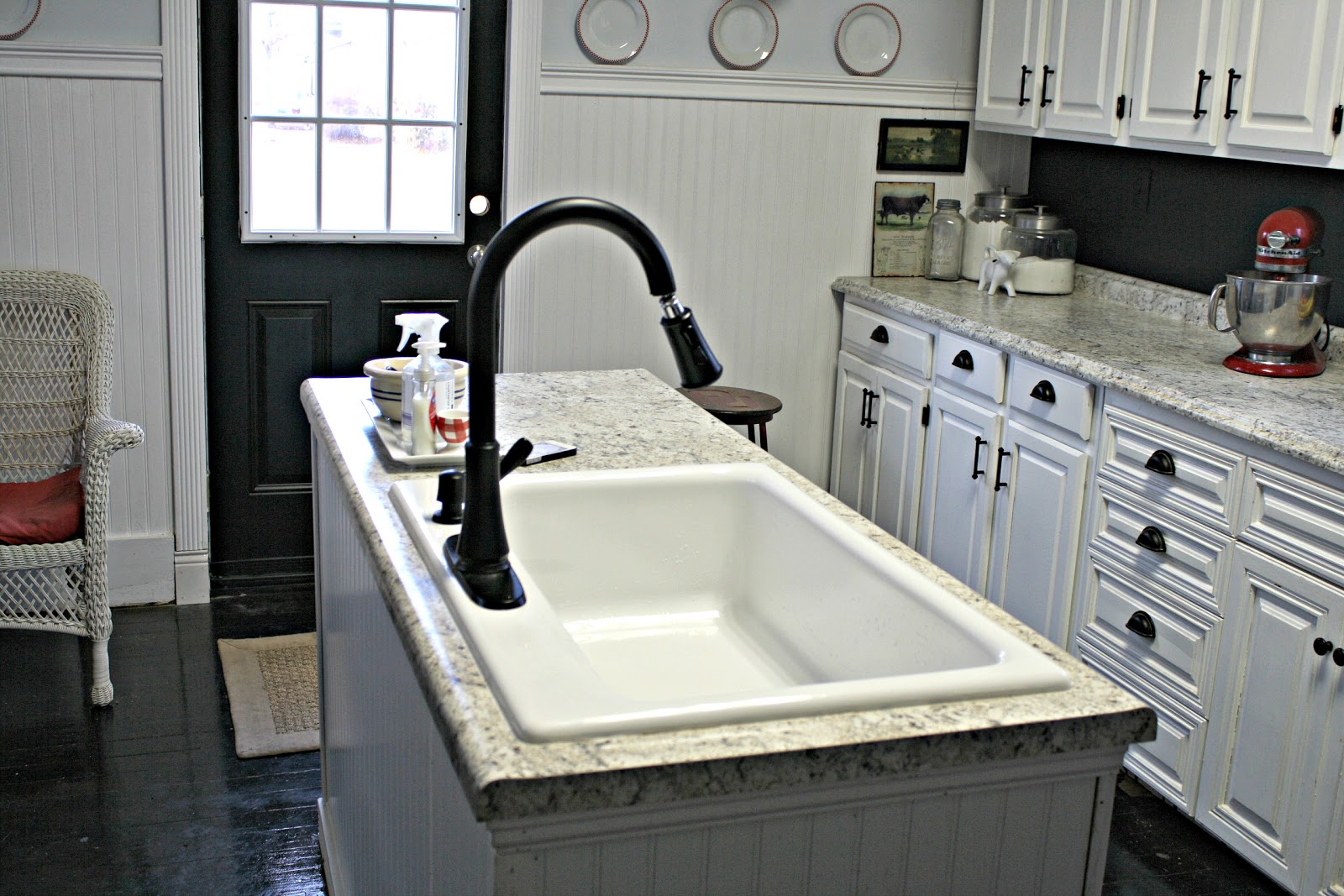 He moved the entire sink base to the middle, rerouted all the plumbing, moved the dishwasher, rerouted that plumbing and electricity, redid the garbage disposal AND built an entire case to go around it all. He framed the whole new island around the sink base and dishwasher, covered it in beadboard, trimmed it in great trim, and hid the new garbage disposal switch so the grandbabies could not find it. All without every muttering a word! 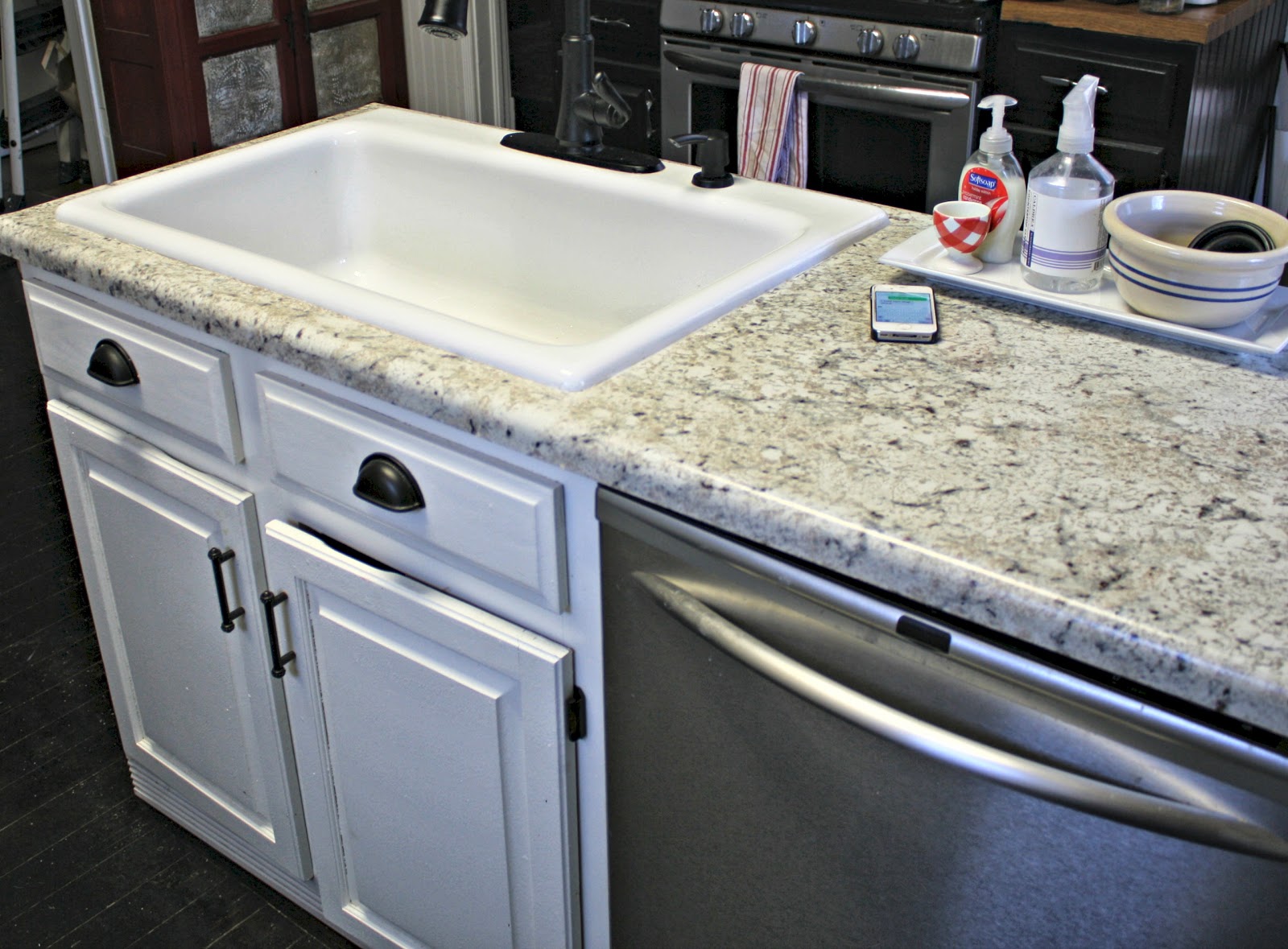 He even picked out the faucet without my help. I told him what I was looking for and he bought one that he thought I would like. And I do! The new sink is He installed the countertops too. The sink now looks out at our front yard and our beautiful historic neighborhood. I can see the trolley drive by and all the neighbors as they go for their daily walks. It is wonderful. 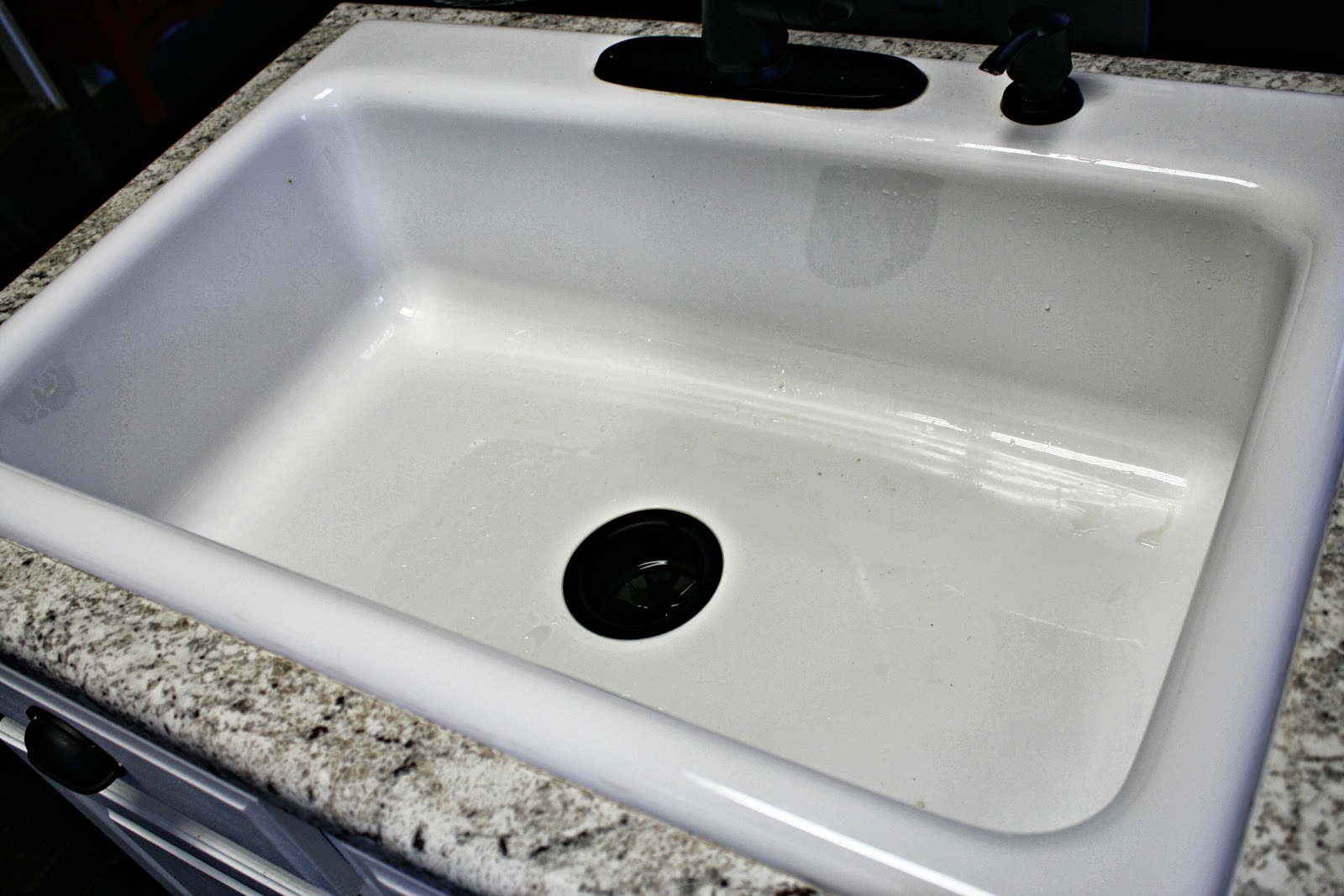 I was determined to get a single bowl sink this time. I wavered back and forth between a very dark gray (almost black) sink and a white one. I finally picked white, mainly because it was on sale. I have not regretted it. The bowl is 10 inches deep. That is right, TWICE as deep as my old mini-sink. This one is 22 x 33 inches wide. It is SO much bigger than the old one. At Thanksgiving and Christmas we piled it with the dishes of our large family and there was STILL room. The sink, faucet and counter tops were all purchased at Lowe's. They have a great selection of single bowl sinks. I think the 10 inch one is the deepest. 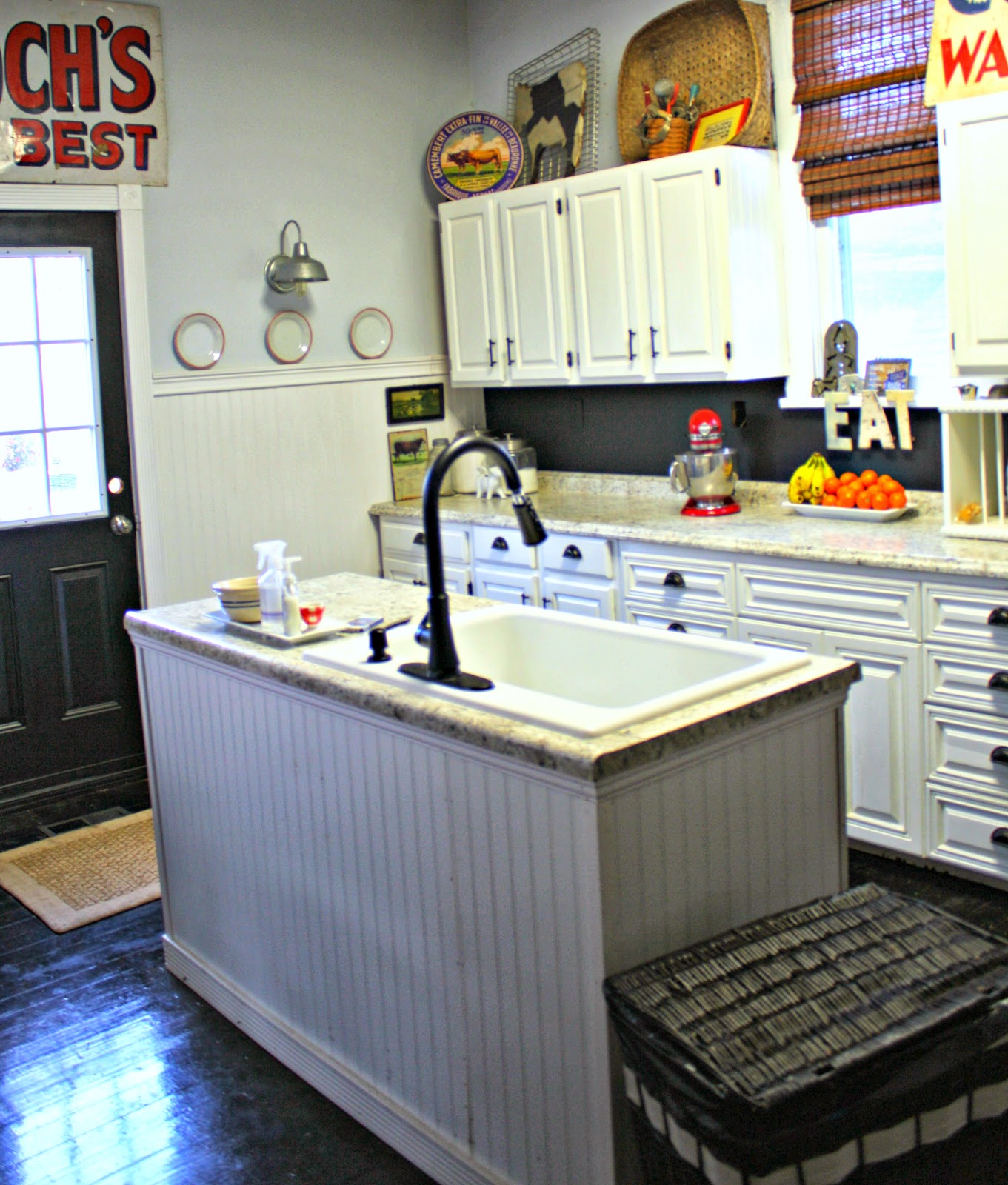 And it sits in the middle of the room. Which is just perfect. By moving the sink, it actually allowed us to put a couple of more cabinets in on the other side. Of course, nothing is ever easy, and we ended up moving the base cabinets all around from when we (thought) we had it finished, but it all worked out in the end. 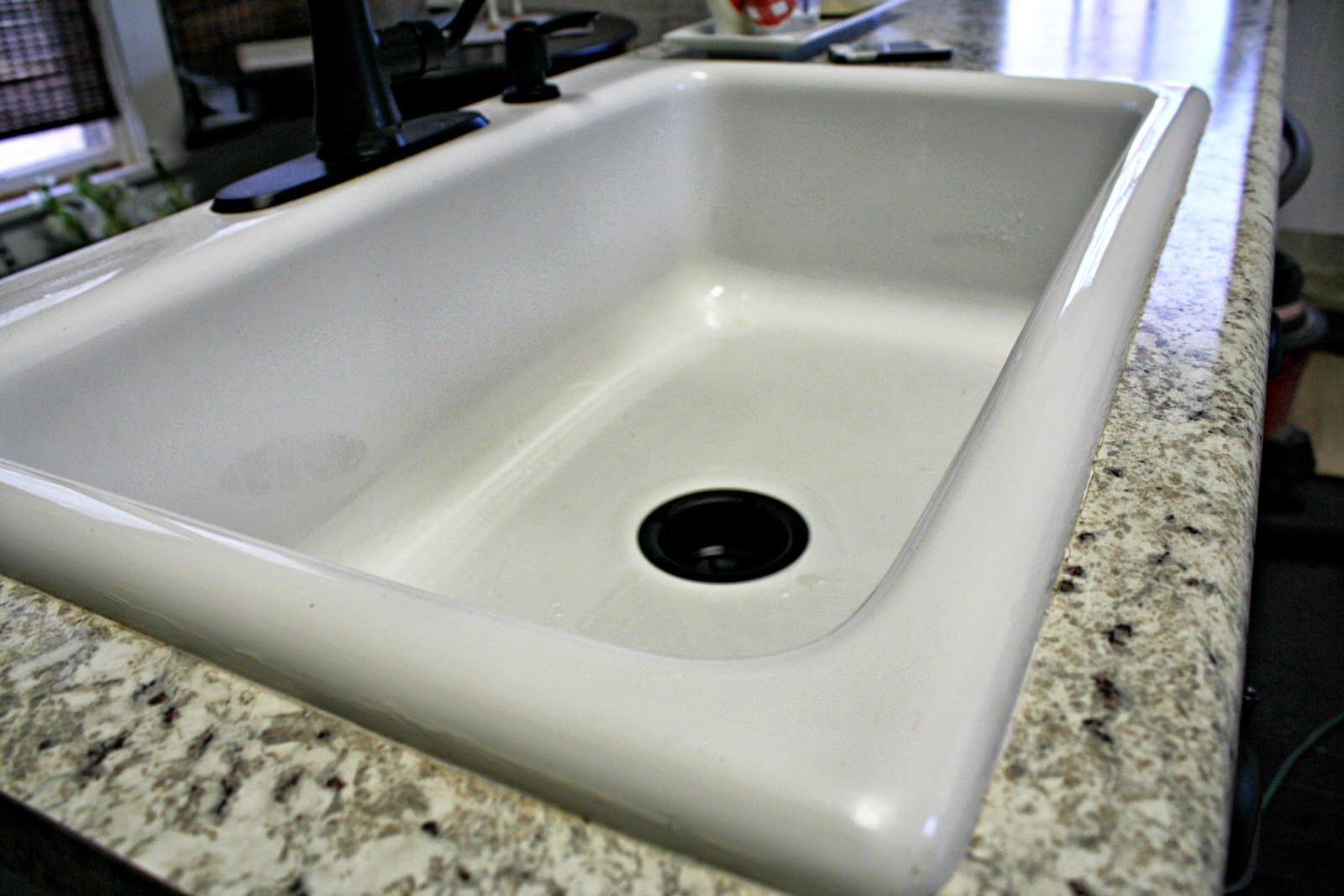 And I am the proud owner of the World's Biggest Sink and the proud wife of the World's Most Patient Hubs.
(By the way, I still need to paint the new island. The Hubs finished it the night before Thanksgiving and it has been non-stop kitchen-activity since then. My goal is to get it painted before January is over.) (And those spots in the sink are reflections from the drain and faucet. No stains!)
Linking with:
Fabulously Creative Friday
Feathered Nest Friday
Between Naps on the Porch
The Scoop
Wow Us Wednesday