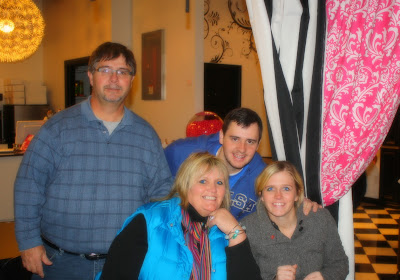 My birthday was last Thursday (the 13th ...day of the year!) Like it or not, those 'ole birthdays just keep rolling around. As one of my (older ha!!) cousins said to me, "Didn't you just have a birthday?"  Well, it actually does seem that way. I guess that is part of getting older. And I would sure as heck like to keep getting older...as opposed to the alternative! Or as Mark Twain liked to say, "Age is an issue of mind over matter. If you don't mind, it doesn't matter." 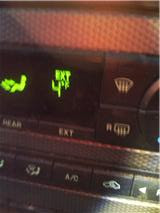 It is always kind of like Mother Nature's birthday present to me each year....If you can read the picture above, that was the temperature on my way to school the morning of my birthday. I can almost guarantee I will have a very cold birthday. Even when I lived in Houston (many years ago) it got cold on my birthday. It actually even snowed!  When I lived in Kansas for years I could count on having white birthdays. But the good thing about Oklahoma is that the frigid temps are very short lived and now we are back to our normal "chill" as opposed to "arctic". 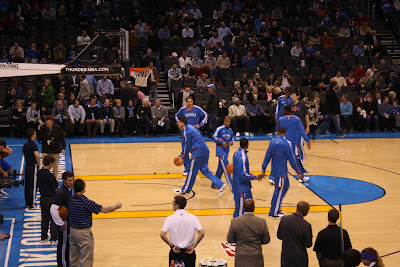 Two of my children have birthday's the same week as me. By the time we had celebrations for each of them, and then by the time I had celebrated with other various family members, I had plenty of celebrating! It was really a birthday week! On the night of my actual birthday, two of my children that were not working or going to school, my Hubby and myself all went to the Oklahoma City Thunder basketball game. 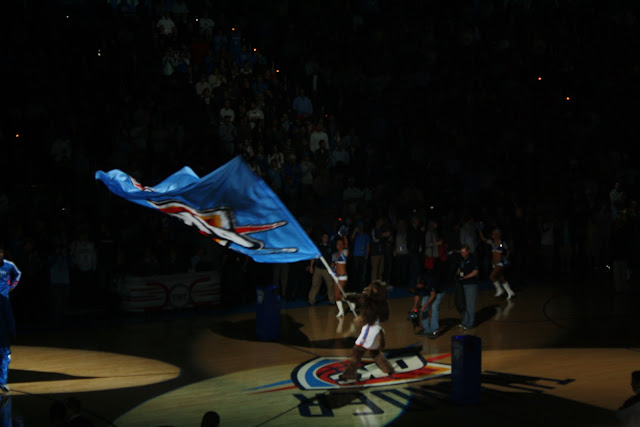 The games are GREAT fun.  There is never a single moment when you are not being entertained. Every single time out there is something going on, or prizes being thrown into the crowd, or some kind of crowd activity. 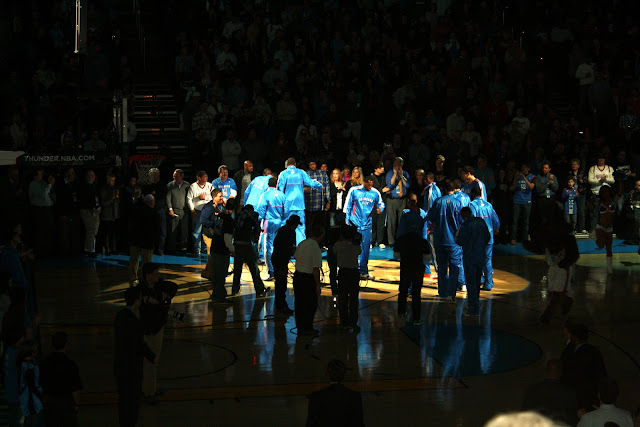 They are NOTHING like the games on TV.  I am a sports nut. I love all sports, but I think pro basketball on TV is boring. But in "living color" it is anything but boring. 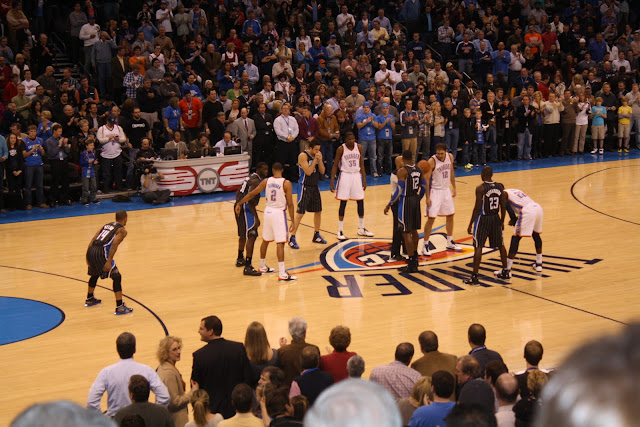 The Thunder were playing the Orlando Magic. The size of those men (boys!!!) that play is unbelievable. They make my sons look small! 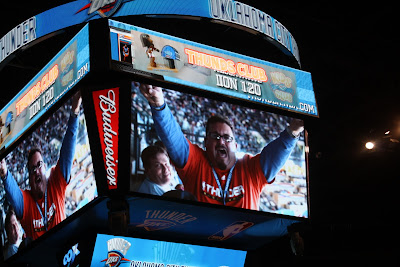 One time during a time-out my name was on the jumbo-tron wishing me a happy birthday. Unfortunately I was not expecting it, and did not get a picture! Dangit!  But, I did get a random pic of the jumbo tron. Imagine my name in lights that big. For one split-nano-second I was ( so far from) famous! 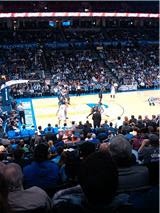 The Thunder won that night by one point. There were two different records set that night. It was a perfect night for basketball and birthdays. 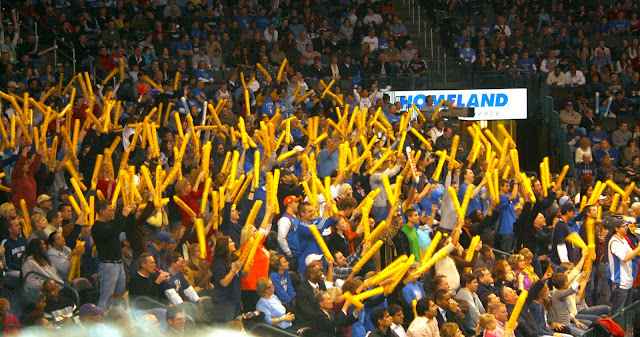 This is the crowd when the opposing team is trying to shoot freethrows. The picture was too cool to pass up. 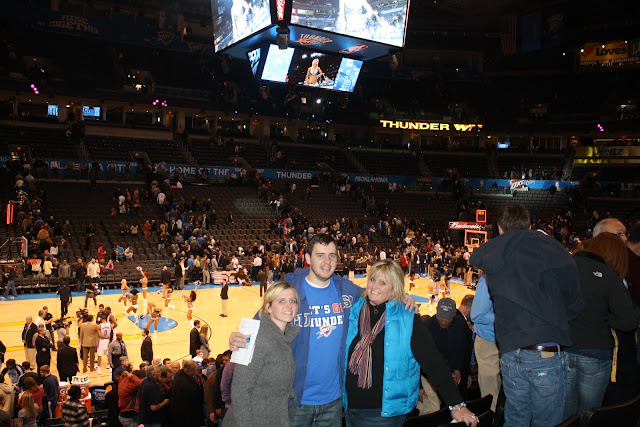 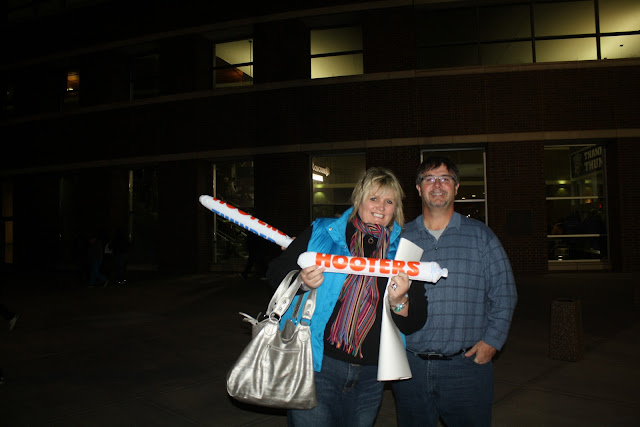 Somehow our area got the Hooter sticks instead of the gold sticks. Hmmmm. ... Well my son enjoyed it! 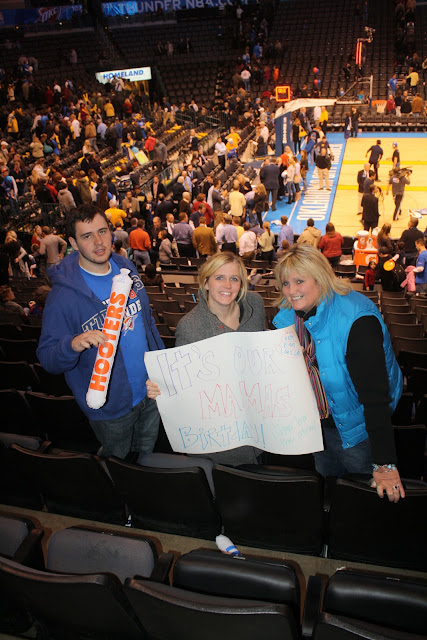 My children made a sign saying it was my birthday, so when the  camera was panning the crowd, they would hold it up for all to see.
(Those little sweethearts!!!!!!) 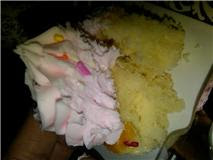 Afterward we went to the cutest little cupcake store for cupcakes and hot chocolate.  My cupcake was called (fittingly) Birthday Surprise.  It was absolutely delicious! I wish I had one now. Sorry, I guess I did not get the pic turned the right way above!!! 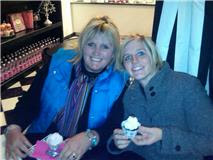 It was a night of great fun. I wish all my kids
could have been there, but it's always fun to
have any of them with us.
It definitely was a night to Thunder Up!!