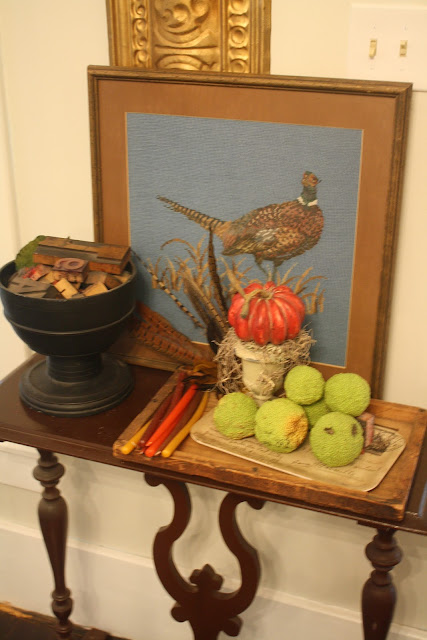 Remember that shed I talked about a couple of weeks ago?  I got a couple of tables out of it, repainted them and then wondered how I had lived without those tables for two years?  Well I also got several pictures out of the shed. 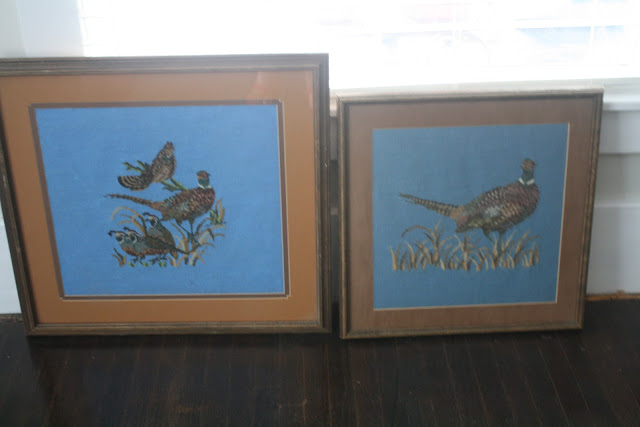 My Grandmother Flanagan was an excellent needle-pointer. Does anyone still needlepoint anymore?  I know it has always been big in the South, but since my Grandmother died, I have not been gifted with any needlepoint pictures or pillows. We had these two pictures in a den that once had a hunting theme. At the time, I thought it was lovely. We had several other pictures as well. My husband loved it. In fact my husband STILL loves it (the hunting theme stuff). He likes to joke with students at school and say, "Hey, I use to have a shirt just like that. I wore it all the time....till it went out of style."  He thinks he is quite the jokester. Well I tried to explain to him that same idea carries over in decorating. He was okay with that...until it involved me dismantling the hunting room. 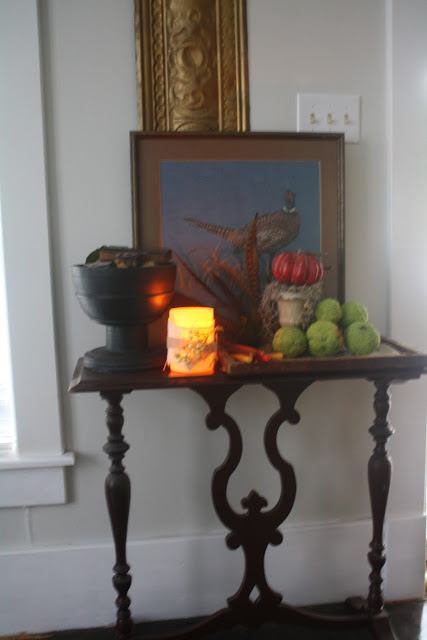 Because my Grandmother so lovingly created these pictures, I could not get rid of them. So when I was cabbaging around in the shed I pulled the two pheasant and quail pictures out. I thought I could clean them up and use them for the Fall season. Oh my goodness. The Hubs was so happy. 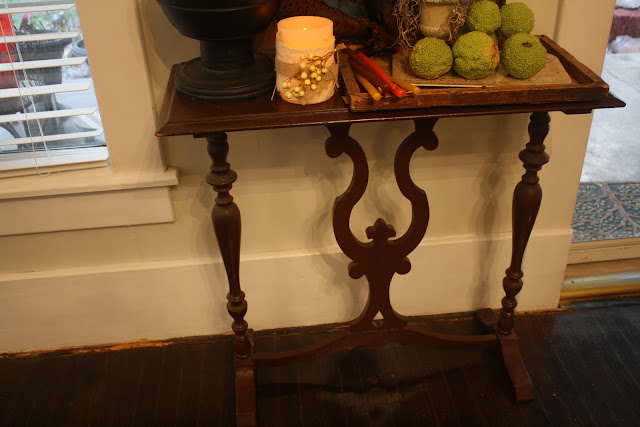 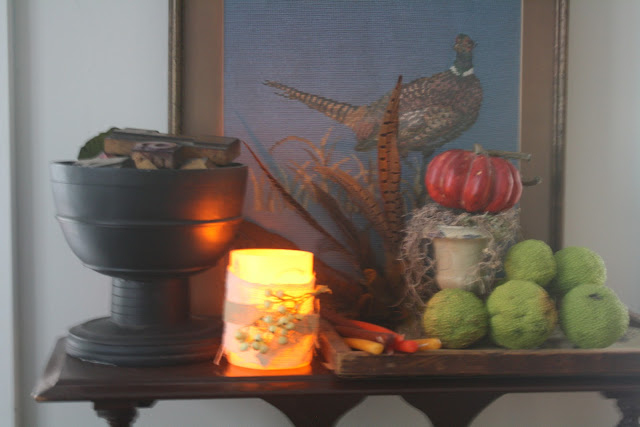 I had some feathers in a wreath for the door and pulled them out for the little tablescape I was creating. I just kind of stuck them behind the little urn. It looks almost like a 3-D image now. 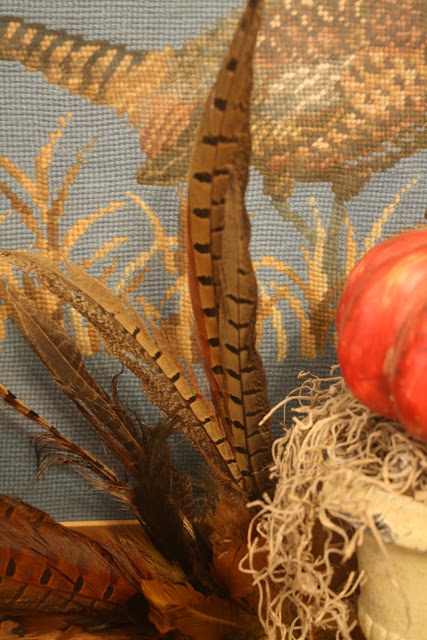 I also had a bunch of green hedge apples I had gathered out at the farm and piled them on a tray for the table. Then I found a reddish pumpkin in my stash and added it for another pop of color. 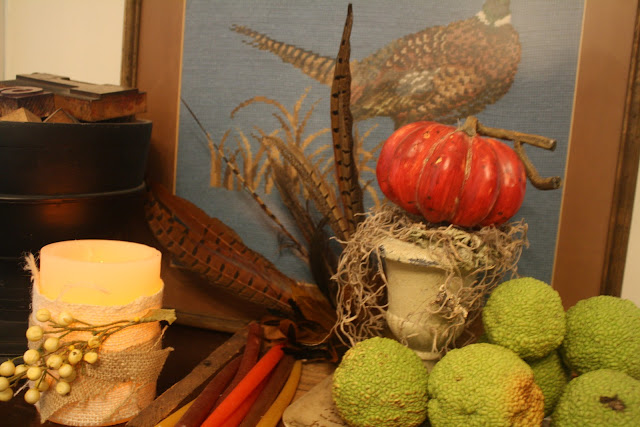 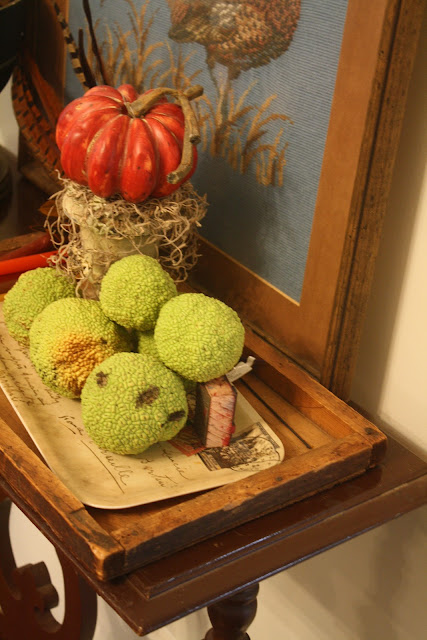 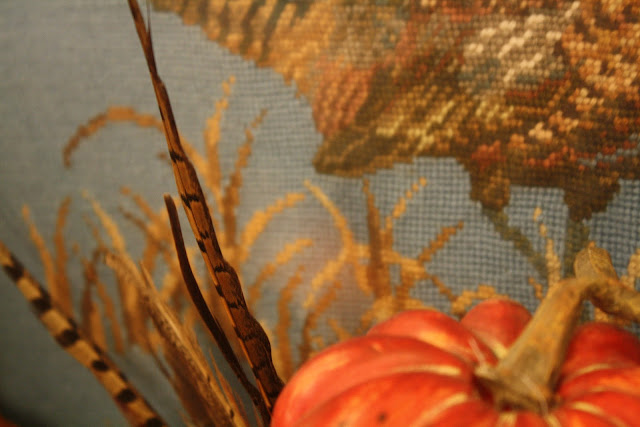 The needle point is actually beautiful. Look at all those tiny stitches. My Grandmother had much more patience than me, that's for sure! The Hubs could not be happier to have two of his favorite hunting pictures back in the house. 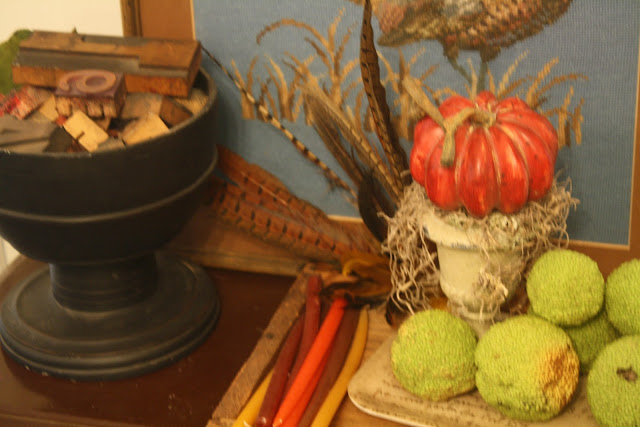 I'm sure my Grandmother is smiling down and very glad that I finally put her masterpieces back out as well! I really do think they look beautiful mixed with my fall decor. I have not taken pictures of the other picture and tablescape yet, by the way. Just when I thought I was through I decided that the candle was too much so I took it off and put it somewhere else. Does it really matter? 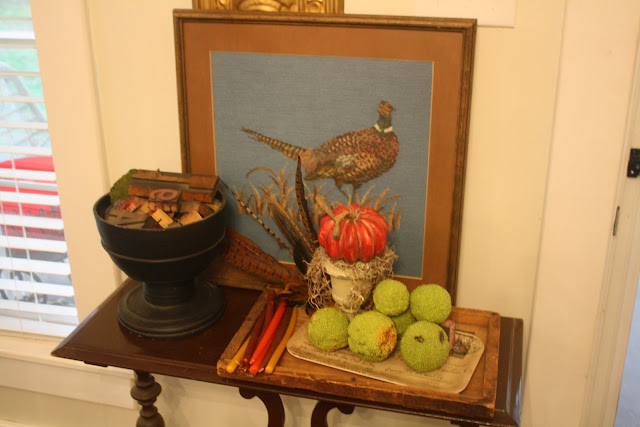 In the meantime, I'll just keep enjoying my "fall" birds. The hunting theme may be gone, but the birds have come back to roost....for a season!
Joining these parties:
Between Naps on The Porch
Wow Us Wednesday
Open House Party