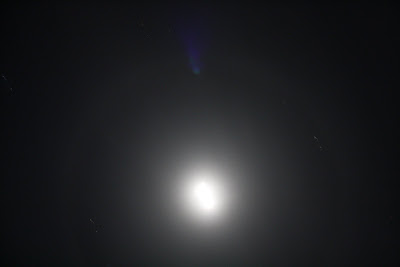 About a week ago my hubby and I were returning home late at night.  The weather was beautiful and spring-like. We both noticed how bright the moon was. We looked up and noticed a HUGE ring around the moon.  There was no mistaking the large ring surrounding the moon.  I went inside to get my camera to take a picture of the phenomenon.  I had the hardest time getting my camera to take the picture of the black night sky with the huge moon and big ring that surrounded it.  Finally, I got a picture that was semi-usable.  I noticed it took f-o-r-e-v-e-r for the shutter to close after I snapped the picture.  I took another picture and this time counted.  It was almost 20 seconds for the exposure! 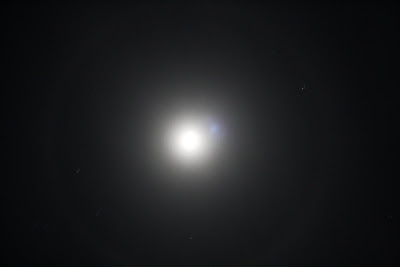 I was determined to get a good picture of the moon and I kept trying!
I also wanted to know what it meant to have a ring around the moon.  I looked it up and found a lot of scientific jargon.  Broken down into laymans terms it means there are ice crystals in the upper atmosphere.The moon ring is the moonlight reflecting through the crystals.
I found out that the ring around the moon is also called moon halo,  moonbows and moondogs.  Some of the sites even went as far as to say the number of stars within the ring indicated the number of days before the bad weather arrives. 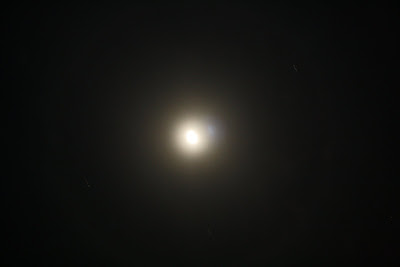 Sure enough about 36 hours later our spring-like weather turned into a major ice and snow storm for Oklahoma.  Parts of the state are still recovering from it.  Now the bad news, it is still cold here and not our usual mild winter, but last night, once again I saw a moon with a ring around it.  Now I know to dread that!!!! 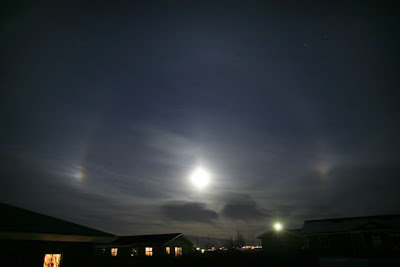 The English teacher in me found folklore that I passed on to my students, such as these rhymes:
Ring around the moon,
Bad weather coming soon.
(Apparently those 'ole folklorist know what they were talking about!) And
Bad weather is on its way-
Snow or rain in a couple of days.
Here's to hoping the rings I saw last night will only bring rain tomorrow!
And that my friends is your science lesson for the day.