Obviously I am sorely lacking if I am posting jello ideas.
But I am.
(Lacking and posting!) 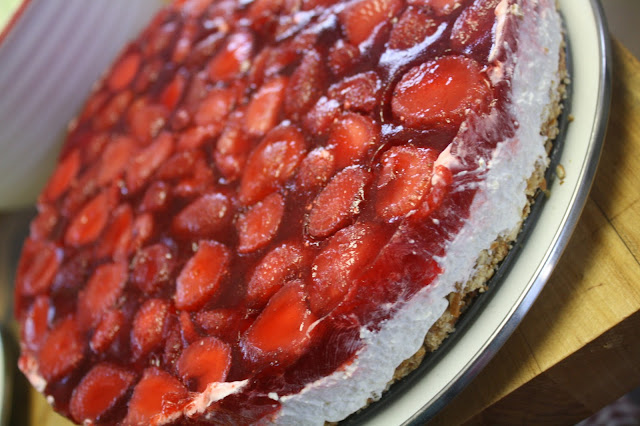 In fact, even as I post this, I realize it has probably been done four kajillion times and I am the only one that never boarded that train. But pretend with me that I had a great idea. 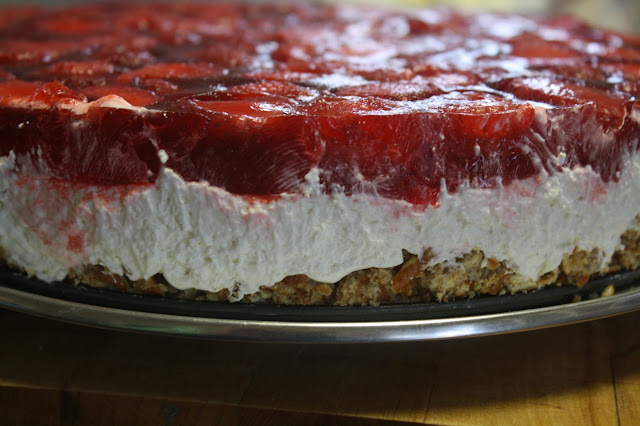 I hosted Easter dinner for the family. I was making the tried-and-true-made-a-million-times strawberry jello with the pretzel crust. But I had a (probably very unoriginal) idea that I would make the jello in a cheesecake pan instead of a casserole-type dish. That way the pretty layers would show....Even before it was cut into. 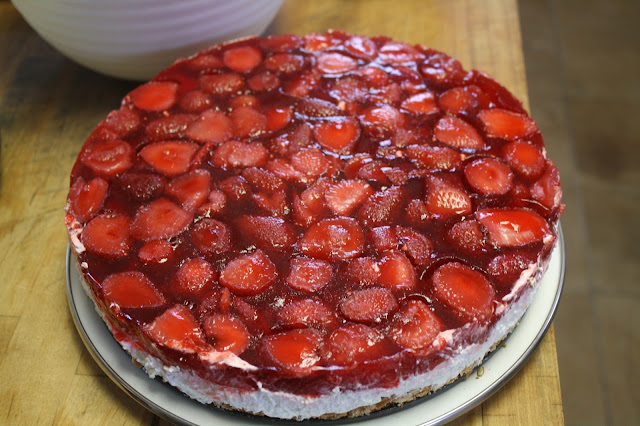 I tried it and it worked like a charm. I made it in my large cheesecake pan and it took every bit of the pan. Just before serving, I ran a knife around the inside edge of the pan. I then popped the buckle of the pan open  and let the pan expand slowly. Bingo!!  Jello!  Pretty Jello!! 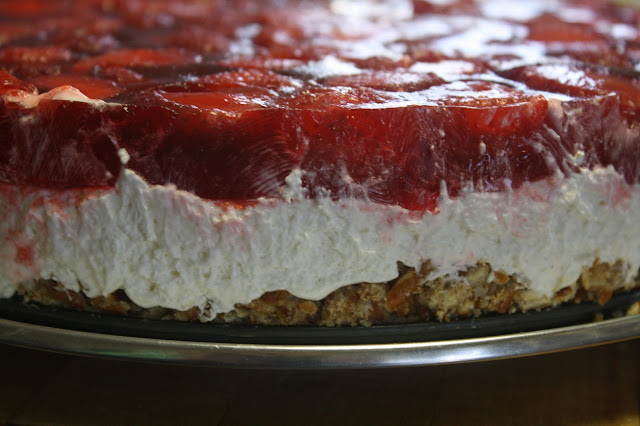 Just in case you are the only person in America to never make this jello, I will include the recipe. And just in case you also think this was an original ingenious idea, I thank you for that! And yes, it tasted just as good as it looked!

HEAT oven to 350°F.
MIX pretzel crumbs,  sugar and butter; press onto bottom of  pan. Bake 9 min. Cool.
BEAT cream cheese and sugar. Fold in cool whip; spread over cooled crust. Refrigerate.
ADD boiling water to gelatin mix in large bowl; stir until completely dissolved.  Pour over cream cheese layer.
POUR berries onto gelatin. Refrigerate 3 hours or until firm.
****TIPS to make this the best.
DO NOT bake the crust over 9 minutes. In fact I usually pull it out at 7 or 8. Over nine makes it like cement.
I add the cream cheese layer when the crust is cool.
After I mix the jello, I put it in the fridge for about 30 minutes then I add it over the cream cheese layer. That has given it time to cool as well as gel a little. I add the sliced strawberries  after I have added the jello layer. That is what makes the sliced strawberries look so nice.

I have seen these recipes that add two blocks of cream cheese. That is not needed at all.
I used my cheesecake pan as I would to make a cheesecake. Super easy to make.
Linking with:
WOW us Wednesday
On the Menu Monday
Foodie Friday