It started out innocently enough.
The mantel was filled with vintage children's books and some photographs.
It was a mantel that could carry me through the spring season. Easily. 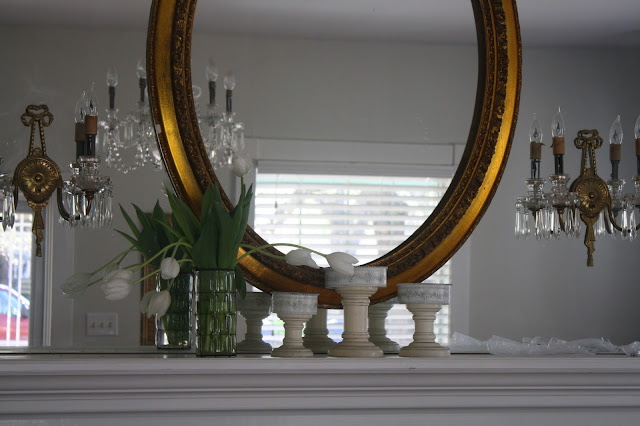 Although in posting this I realize that vintage book mantel was up for two months. That is a really long time for me. (So it really needed change!)  Also please note that when I went to take the pictures of this (the new) mantel there were a jillion little plastic bags of screws and such on the mantel. My Hubs was in the process of putting in a new storm door for us (which you can kind of see in the far left.) He "warned" me about touching any of those sacks of screws and gadgets. SO they stayed where they were. 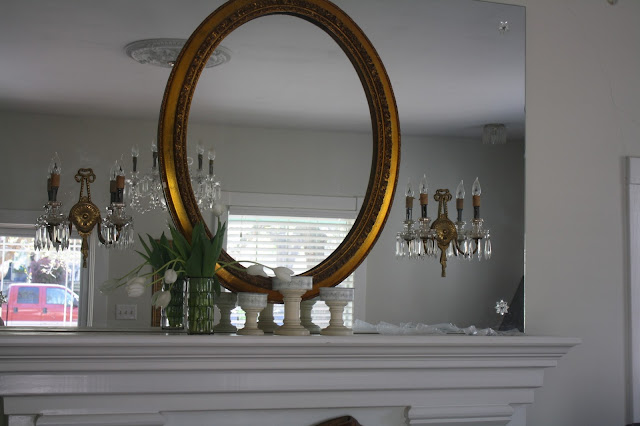 I have posted before about our large very-white mantel. It is almost eight feet long, and it has a HUGE mirror hanging over it. I put the old frame up to try and break up the huge mirror. It kind of helps. When I mention getting rid of the large mirror, my Hubs almost has a heart attack. Not only is there no telling what is behind the mirror, but if you will notice there are two wall sconces attached to the mirror/wall. We will probably frame the mirror out at some point, but I am afraid it is here to stay. ANYWAY.... 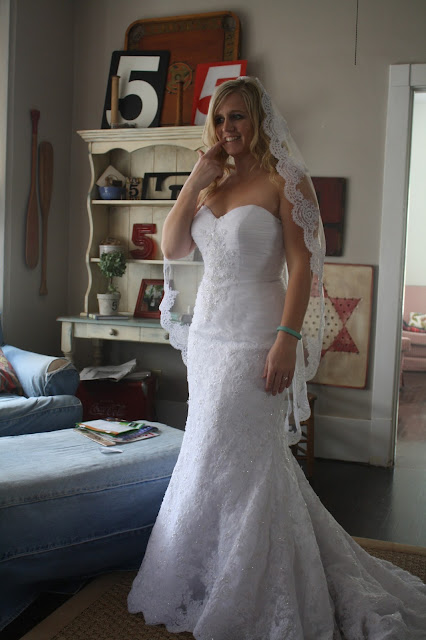 Our daughter Annie came over on Saturday. She and her fiance are "eloping" to Scotland in three weeks. They will be spending their wedding and honeymoon traveling for two weeks in Scotland and Ireland. They are getting married at an old castle in Scotland. It sounds absolutely romantic and wonderful. So Annie brought over her dress so we could make a few last minute adjustments. Since she had it on, I decided to snap a quick picture of her. 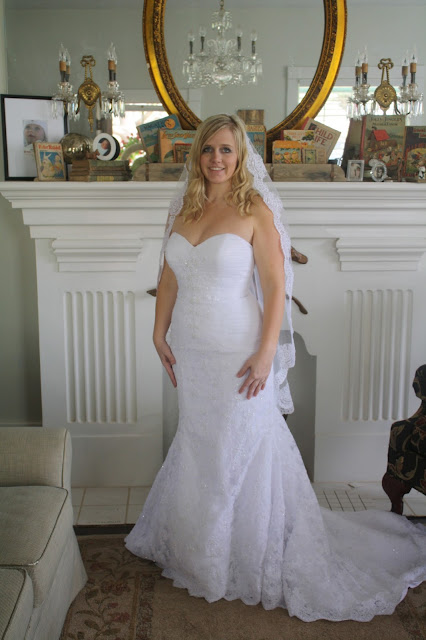 Then the Hubs pointed out that I should take a picture of Annie in front of the big white fireplace and mantel. It made for a much better picture than a bunch of 5's. So I snapped a couple of pictures. I noticed that the collection of children's books was WAY too busy for some wedding dress pics. So I moved everything off the mantel. 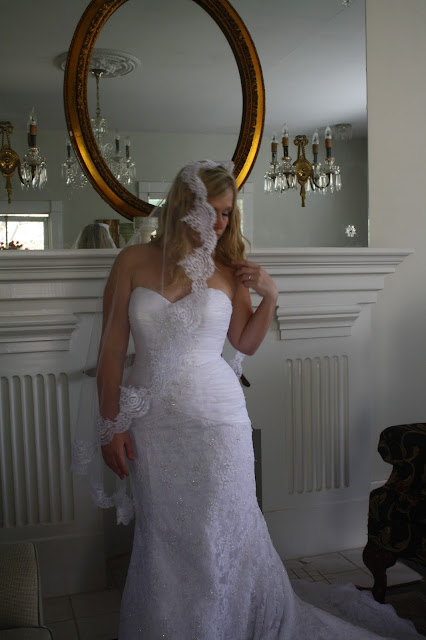 So I snapped a couple of more then decided that the mantel looked too empty. Geez. I just can't be pleased! 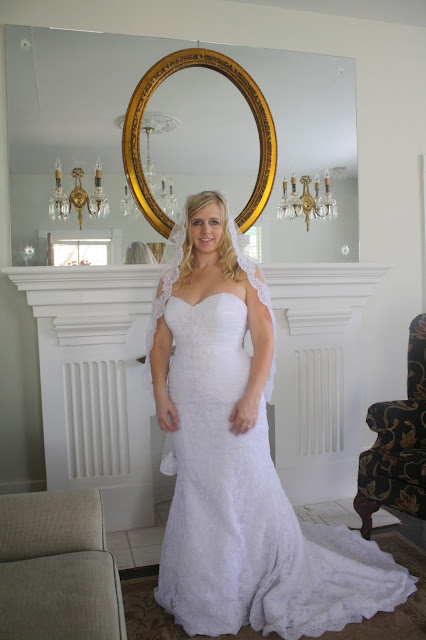 So then I put a little trio of off-white pillar kind of things. That made it a little better. 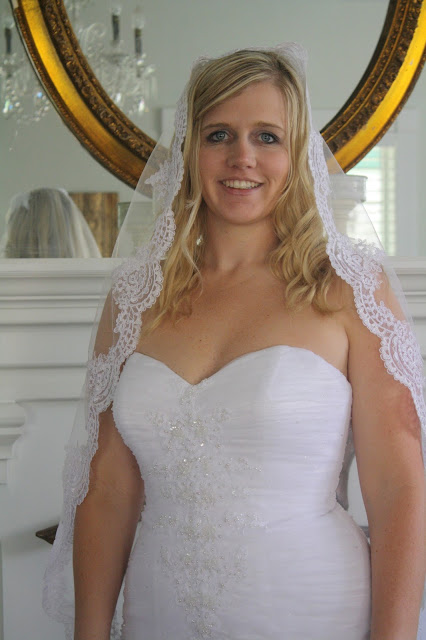 You can barely see the little pillar(thingy's) behind Annie. Then I decided that she looked kind of awkward (empty???) just standing there staring at me. (And to think this all began because she wanted one simple thing done to her wedding dress and I took my camera out!) 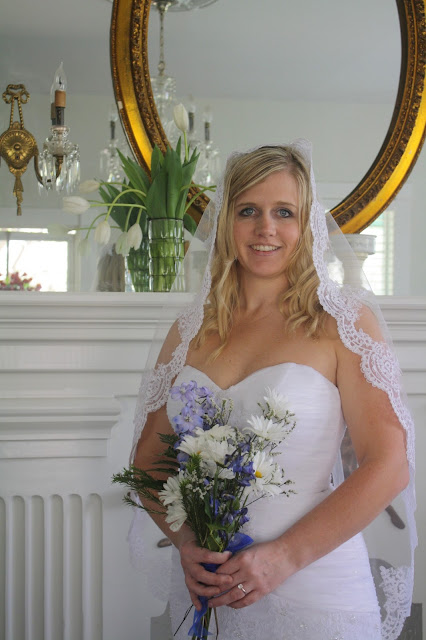 I had a vase of white tulips already in the room, so I moved them to the mantel as well. That helped. But Annie still looked kind of empty. So I had another bouquet that was towards the end of its life and I took it apart. I randomly pulled out the best flowers from the (old) bouquet and tied them with a blue ribbon. That made Annie look less empty. (Her real bouquet is a wild-flower type that a florist in Edinburgh will create for her.) 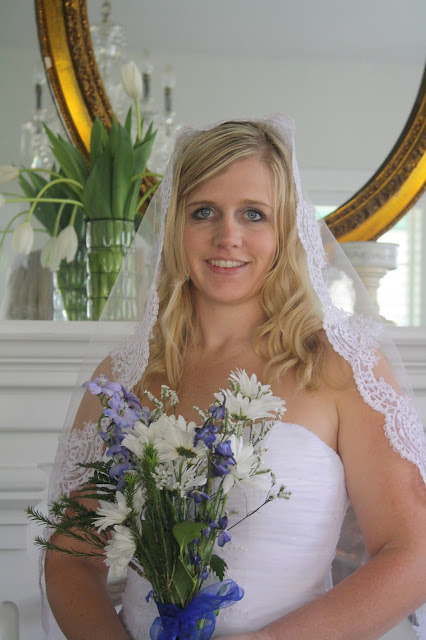 By this time I wished we had actually "planned" this impromptu photo session. I could see some great pics coming out of it, IF I had only planned. Annie had not planned on photos either and did not have her hair done or her "wedding" makeup on. 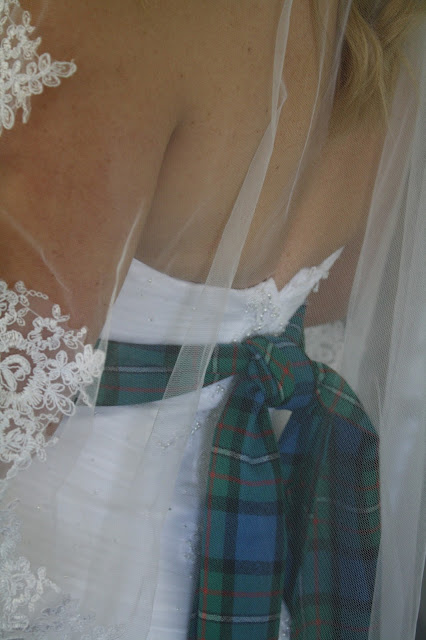 Since Annie is getting married in Scotland, she is wearing the family tartan. We had it ready, so I got it out and went ahead and tied it around her. Not that is a totally different look for a wedding dress, isn't it? I loved it! 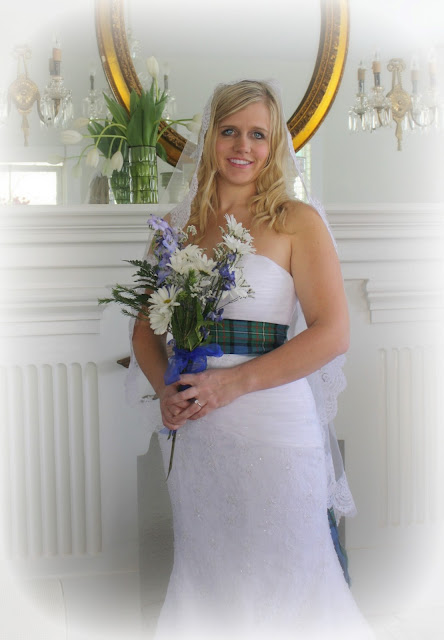 By this time I knew that our photo-shoot-that-was-not-planned had produced several very pretty simple wedding dress photos. 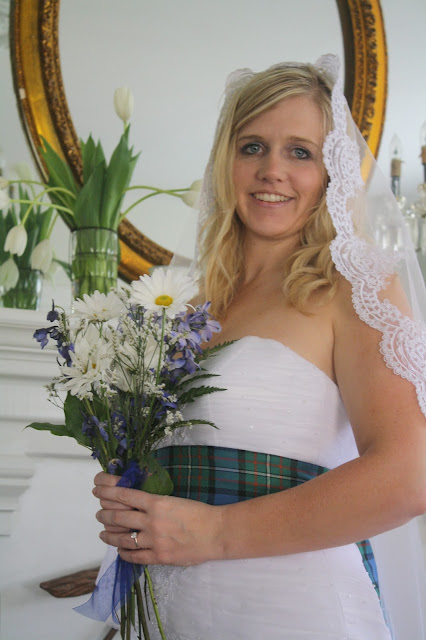 So I told Annabelle that now we need to actually PLAN a bridal photo shoot....with wedding hair, make-up, flowers, etc. I thought the huge white mantel with the simple decor, the old gold frame and the chandelier sconces looked just lovely. 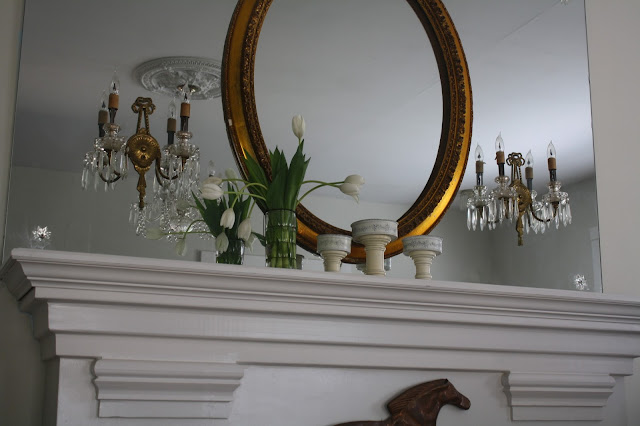 So that long story is how my mantel went from vintage children's books to a sweet and super simple vignette. It took three times longer to tell the story than it did to take the pics! 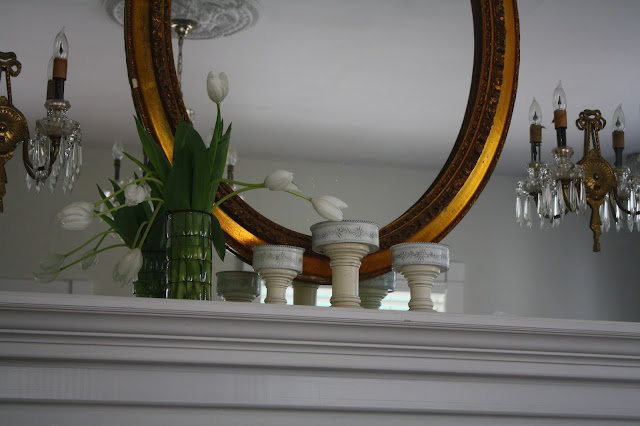 I liked it so much that I am going to keep it this way for a while. ....That and the fact that Annie and I have Photo Shoot #2 coming up soon!