Marching to the Beat

Do any of you have one of those people in your life that is absolutely the hardest person in the world to buy a gift for?  They can either afford anything they want, or they already have everything to begin with. That would be my Mom. It is so hard to buy something for her without it seeming trite. You know,  just buying a gift because you owe a gift.
Because of that, I am on the look out for my mom's gift(s) long before I owe her one!
I always want the gift to be original. 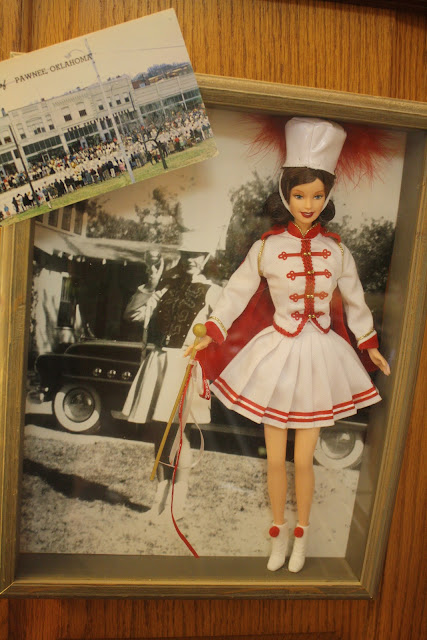 And that is how this gift came to be.  Believe it or not, it was not planned. In fact, had I planned it, it probably would not have turned out so well.

I had a small black and white picture of my mom in her
drum major outfit.
It was a cool old pic, as she stood proudly in her uniform in front of some big 'ole car. 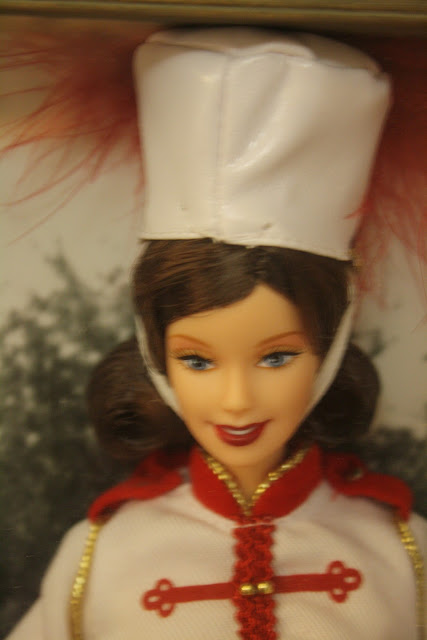 I use to peruse Ebay frequently. I don't do it so much anymore. (I made this gift about three years ago.) One thing I liked to look at were old postcards. One day I found one from Pawnee, Oklahoma, where my parents had grown up. Not only that, but it was of the Pawnee (Band) Parade, of which I had heard my Mom's stories many times. She was the drum major for Pawnee High School and led the Pawnee Band Parade that consisted of 50 or more bands. So of course I bought the Pawnee Parade postcard. (say that three times!) 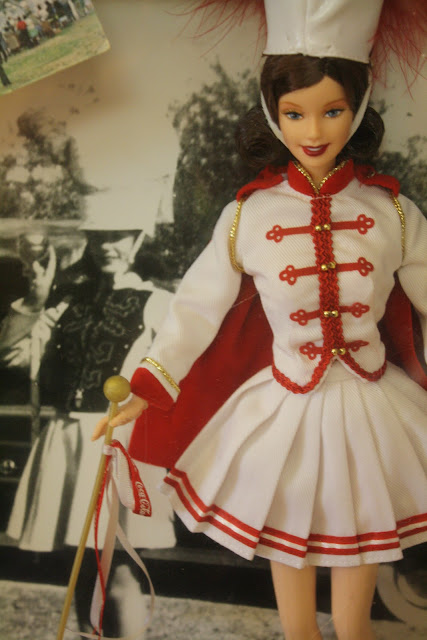 I have no idea what I was looking for when I found the Barbie Drum Major doll.  It was one of those special edition Barbie's. It was going for a reasonable price so I got it too. I had the postcard and the drum major Barbie and it never occurred to me to put them together. (By the way, note how similar the Barbie looks to my mom. Not only the brunette hair, but the beautiful face.) 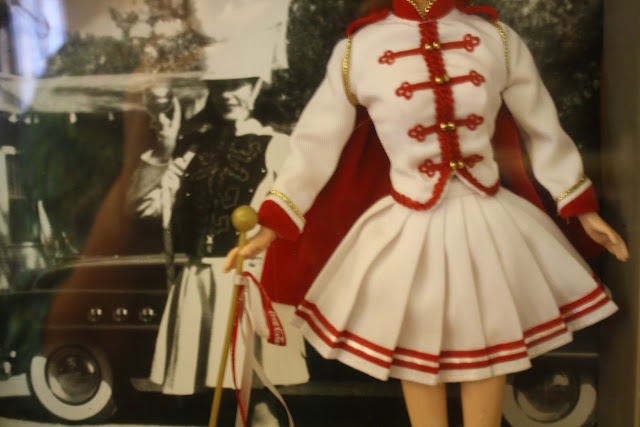 Then one day in Hobby Lobby I saw one of those shadow box frames on clearance. I bought it. Somewhere in my mind, a few days later the thought crossed my mind to put the Barbie in the frame and the postcard with it and give it to my mom.
(Look how similar the uniforms are too.) 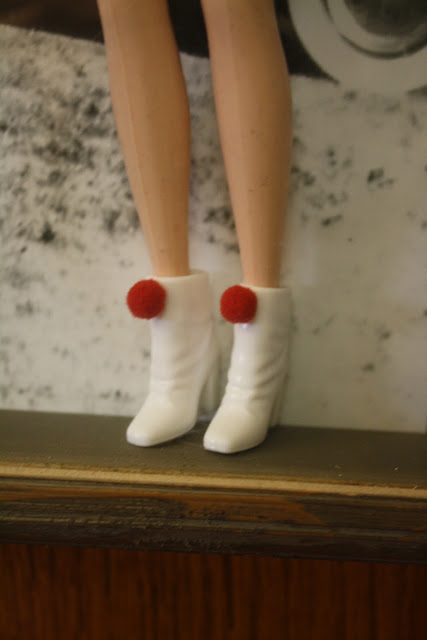 The postcard looked small, so I scavenged around and found the old black and white of my Mom. It turned out to be perfect. I took the picture and had it enlarged to fit the shadow box. I glued it in the back and then positioned Barbie. 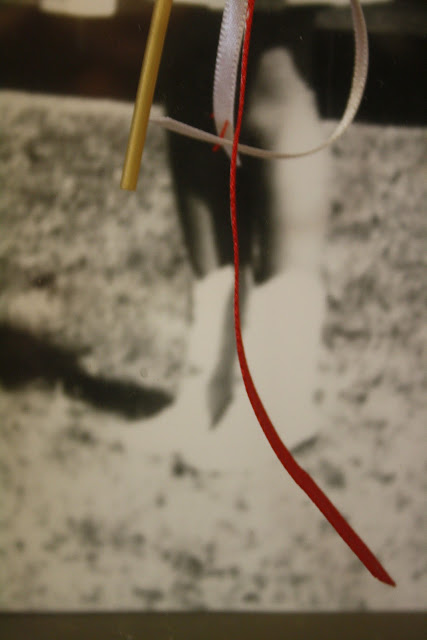 After I got Barbie positioned, I glue-gunned her to the bottom of the frame! 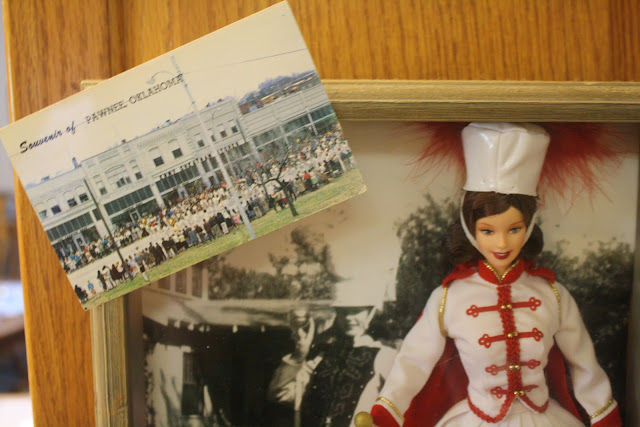 I put the new and improved back on  (it had the blown up picture glued to it.) Then the only problem was that I didn't have room for the Pawnee Parade postcard  (which had started this whole nonsense).  Finally I decided just to glue it to the edge of the frame at a diagonal. Perfect. 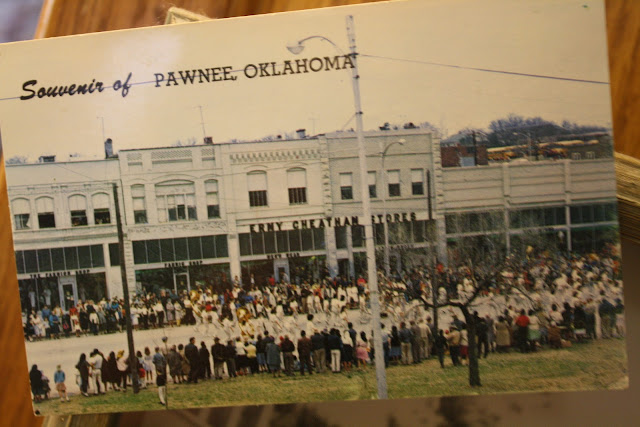 I wrapped it up and could not wait to give it to my mom. 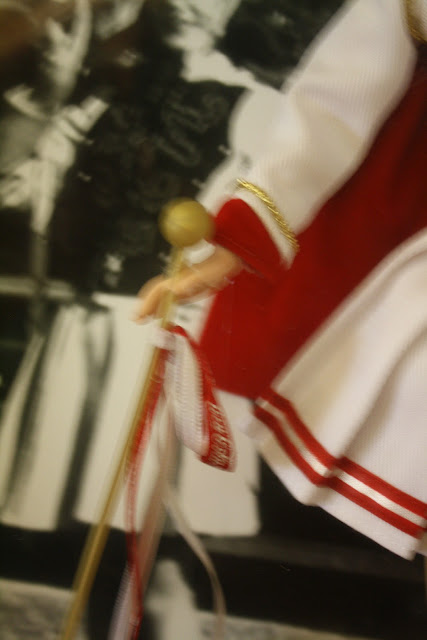 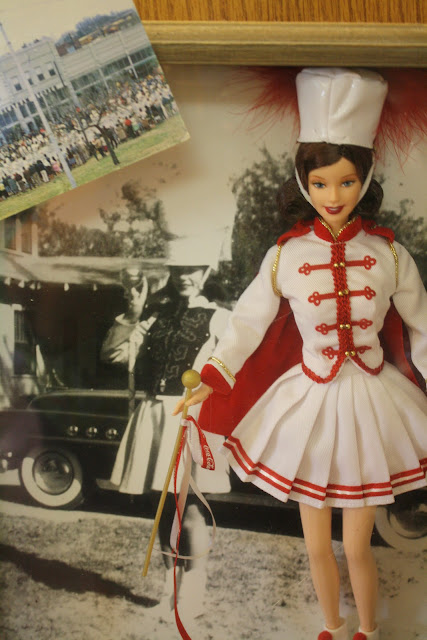 Not only did my Mom love the gift, but it conjured up all sorts of memories for her and new stories for the grandkids to hear. The only problem was that I raised the bar on my original gift-giving, and then it meant I had to out-do myself! 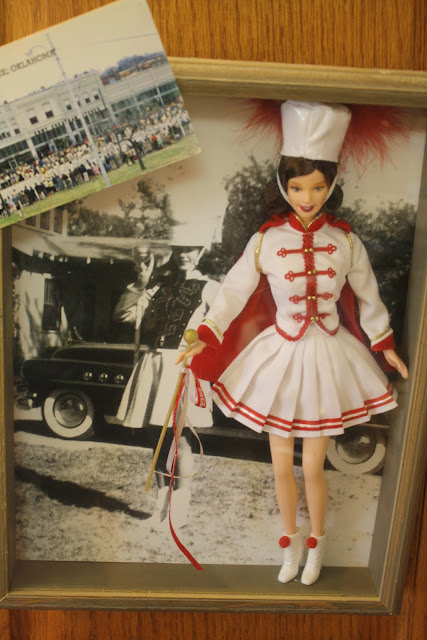 I think the same premise could be used with other pictures and mementos. It was a quick and easy idea to put together....once my brain figured out I had all the elements already at my house! 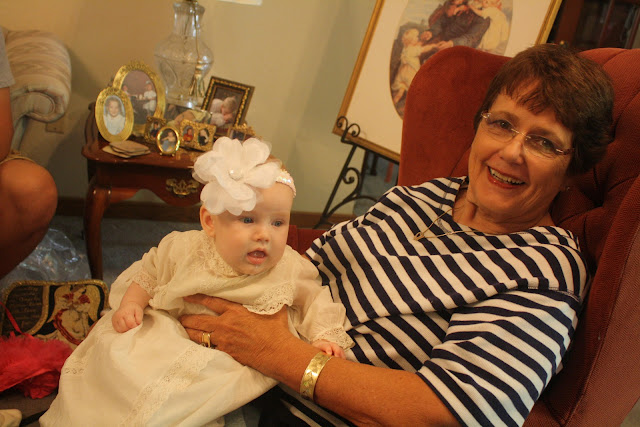 Here is my Mom, the drum major, today. Just as beautiful as ever.
Linking with:
Metamorphosis Monday
Thrifty Treasures
Wow Us Wednesdays