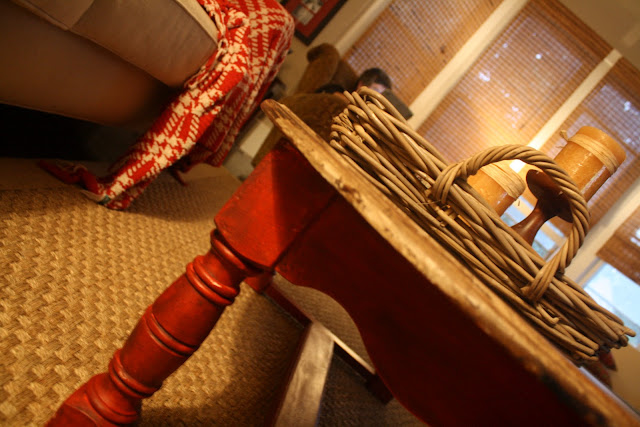 Remember that storage shed I said we were purging?  Well this table came from the same storage shed. It has been somewhere in our house(s) since the 1980's. That not only dates me, but the table too! The table had to spend the last year in storage....because as I told you, after moving five kajillion pieces of furniture on our Big Move, the boys just threw (literally) anything they wanted to into the storage shed. I am just now rescuing things a year later! 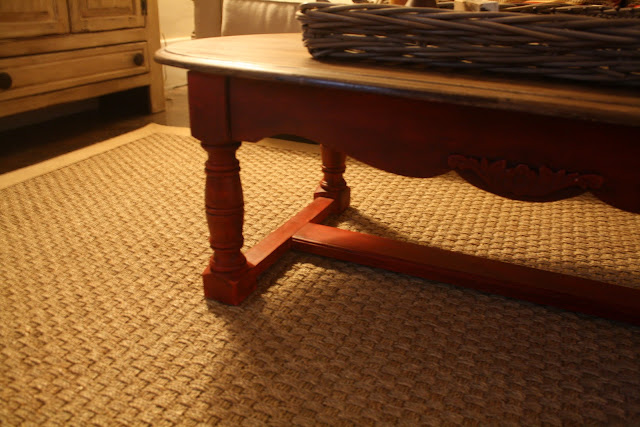 This table, made totally out of real wood, has been a work horse. For the past ten or more years it has been in the children's den. Before it was in their den, it was a solid oak color with little pieces on the end of the table top. I took those pieces off and painted the bottom of the table white and white-washed the tabletop. It stayed that way for about ten years, while the kids used it in their TV room/den. As you can imagine, there were a lot of shoes put on top of the table. There was a lot of drinks and food on the table as well. It was way past time for a make-over! 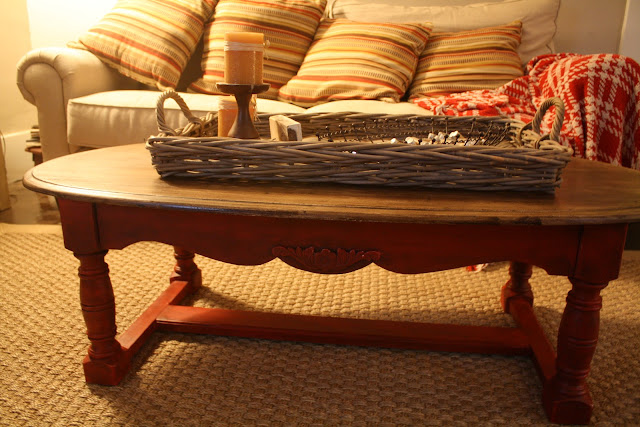 I took my Annie Sloan red chalk paint (Emperor's Red) and painted two coats on the bottom. I was going to put Old White on top of that, but I liked the red so much, I just decided to leave it. I stripped down the top as much as it would strip, then applied a dark wax to the top and the entire table. It was just what the table needed. 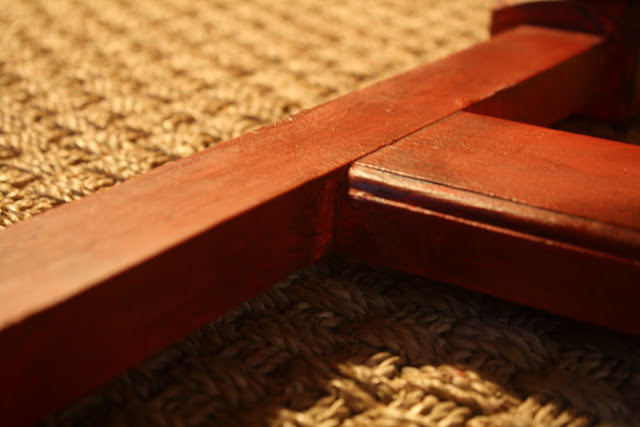 I really want one of the old furniture carts for a coffee table in this room. But until I can find one I can afford, this will suffice. The pop of red against the rug and couch is just what I like. 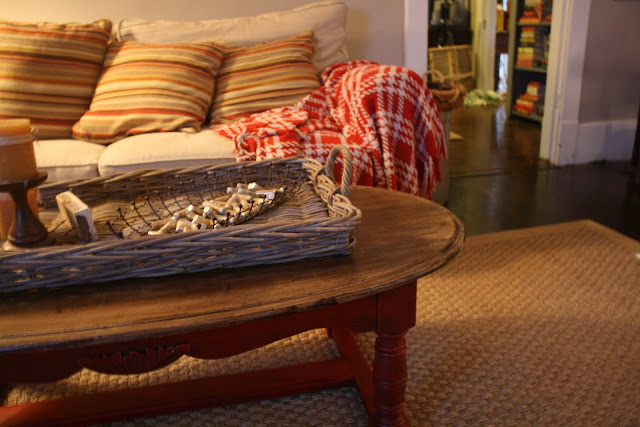 There was zero staging involved in these pictures (that were taken in the evening). Can you tell by looking at the backgrounds? Oh well, such is real life! 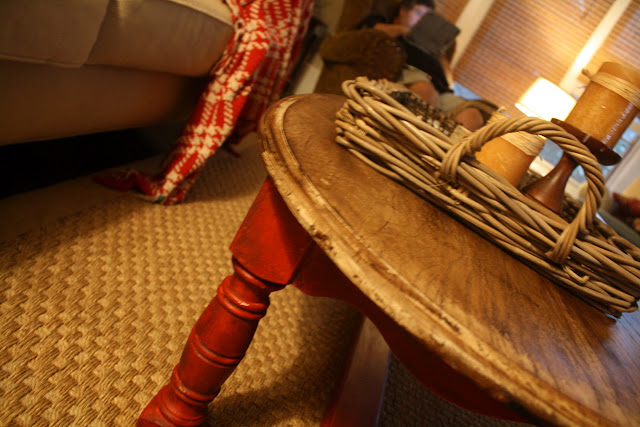 The top if pretty scruffy, but I had a good idea. I wanted to find someone to make me a zinc rectangular top to put on top of the table. I mentioned that to the Hubs and he gave me the 'ole familiar "uhmm". I always take "uhmm's" to mean a definitive YES! (They should learn to listen better!)
Yes, that would be Hubs in the background on his laptop and watching TV at the same time. Hence the "uhmm"!! 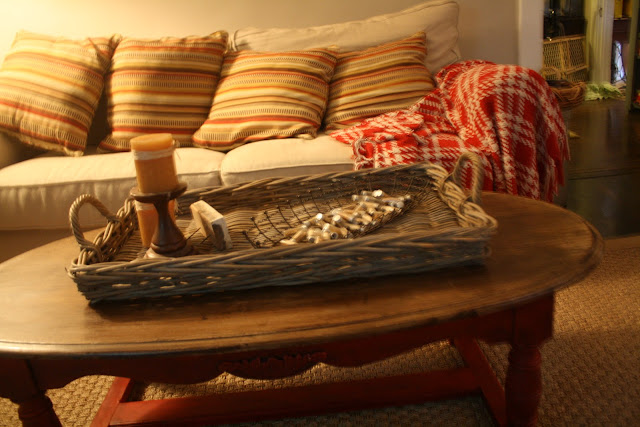 After the table had been in the room about a week, my son Luke saw it and said, "I really can't believe it took you a year to get it painted and in here. What took you so long?"  I agree!  I took that as a compliment too! 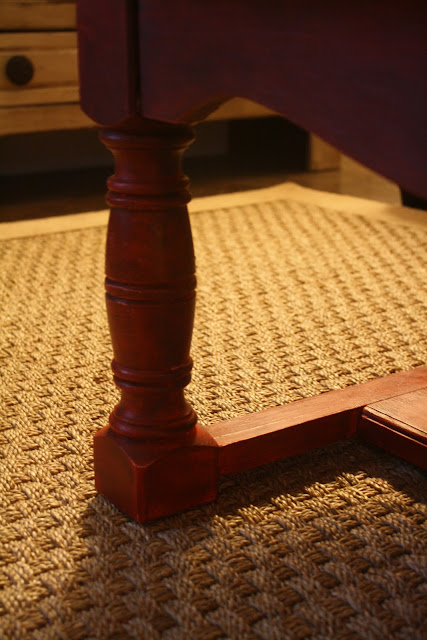 Then just yesterday, I was looking through some of my "favorites" that I have saved in a computer file. (Pre-Pinterest)! 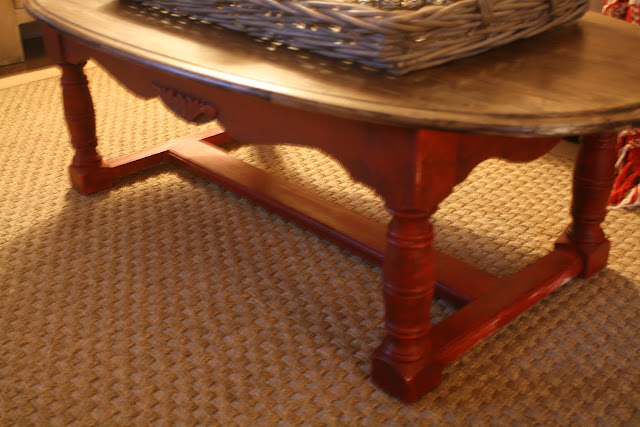 Guess what I found?  A picture from Pottery Barn that looks very much like my own den. I had forgotten all about the picture and table. Apparently somewhere in my head I remembered the table, because it looks like mine is painted the same color. I have the sofa and walls. I even have that exact typography picture (although in a different room, thanks to Susie Harris). 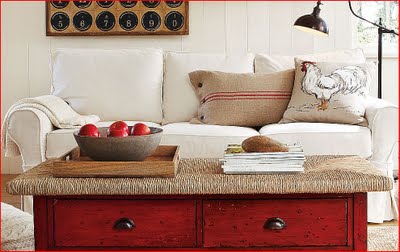 When I found this picture I excitedly showed the Hubs how closely our own room resembled this long-forgotten (except for somewhere in my psyche) room. His reply.....(you guessed it) "Uhmmmm."  I am sure that means to GO BUY THE LAMP! What do you think?
Linking with:
Metamorphosis Monday
Wow Us Wednesday
Thrifty Treasures
Furniture Feature Friday
Tutorials, Tips and Tidbits