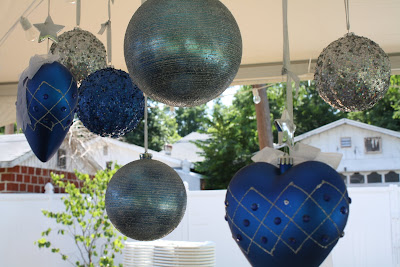 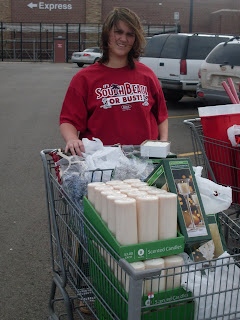 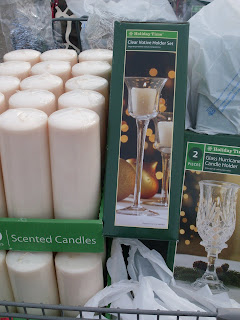 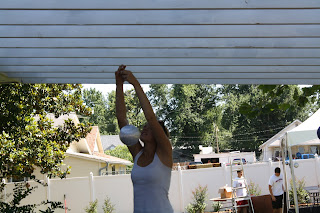 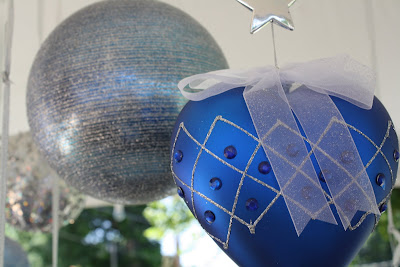 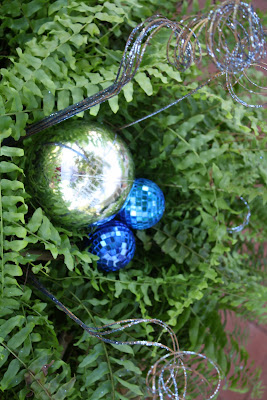 Last December (2008), when Christmas was over my daughter and I went out for the after Christmas sales.  I already knew that my niece was getting married on July 4, 2009.  I saw all the decorations and lights and candles on sale, and I thought....."hmmmmmmmmmmmmmm".  I called my brother and sister-in-law and told them I was at Wal-Mart and Hobby Lobby where I was finding Christmas decor from 50-80% off.  I asked them if they wanted me to pick anything up for the wedding.  They told me to get whatever I thought they could use.  I knew the wedding was going to be silver, creams, blues and a little bit of red, so it wasn't too hard to shop!  The first two pictures show my daughter Taylor with one of our two baskets of candles.  Lots and lots and lots of pillar and votive candles for at least 50% off!  Then on to Hobby Lobby where we found lots and lots of giant silver balls.  We bought LOTS of them.  Many different sizes, but all relatively large. Then we found the cute blue hearts.  Then we found lots of ribbon in silvers and creams.  We also threw in a few of the regular glass balls.  I knew we could use them on the reception tables or in hurricanes or somewhere.  ...And don't they look cute in the ferns?
The candles were used in the church and at the reception.  The reception was held in the bride's parents backyard.  We spent several days decorating and getting ready. One picture is the bride putting some of the ornaments under one of the many venues for guests.  Don't they look beautiful hanging from ribbon and fishing wire?  When the (Christmas) twinkling lights were on at night it was just magical.
And the best part is the bride and groom had all kinds of decorations for their first Christmas.  Every time they look at them they can remember the night of their magical wedding!
SOOOOO, when you are looking at Christmas decorations, think outside the (tinsel) box!!!