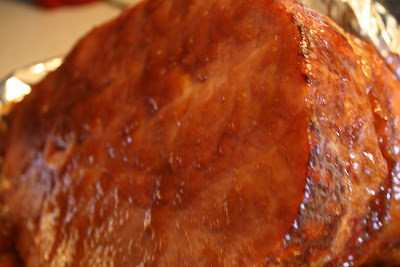 Do you remember the butters I made at Christmas and gave to people? One of them was Crock pot Apple Butter. SUPER easy. Wonderful smell. Delicious taste.  Well, I had a jar left.  I also had a big ham I needed to cook.  Somehow it just hit me, "Hmmm, I wonder how that Apple Butter would taste basted across that butter?"  So, I decided to try.

I used about 1 3/4 cup of Apple Butter and mixed it with about a 1/4 cup of syrup.  Yes, you read that right.  Syrup.  No, I have never heard of this. No, I have never tried it before. But rest assured I WILL try it again. It. Was. Delicious! I mixed the syrup and the Apple Butter together and heavily basted the ham.  I glazed the entire ham and put extra on the outside.  I covered the ham with foil and baked like normal. I had already used most of the concoction, but with what was left, I re-basted a couple of times during the cooking. 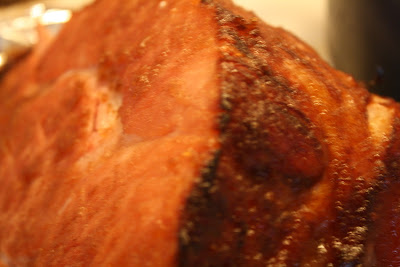 And, even if my pictures are not that good, rest assured the ham was certainly good. Look at the outside of that.  It was crispy and had a wonderful taste. I am sure that store bought Apple Butter would work well too.
Now, I have deleted a pic (on accident), so I need to get this posted before I ruin the whole post.
We are under a blizzard warning here in Oklahoma. That is highly unusual for us.  Time for me to get in the kitchen and see what I can cook up for a cold, cold snowy night.
Don't forget to try the ham baste!