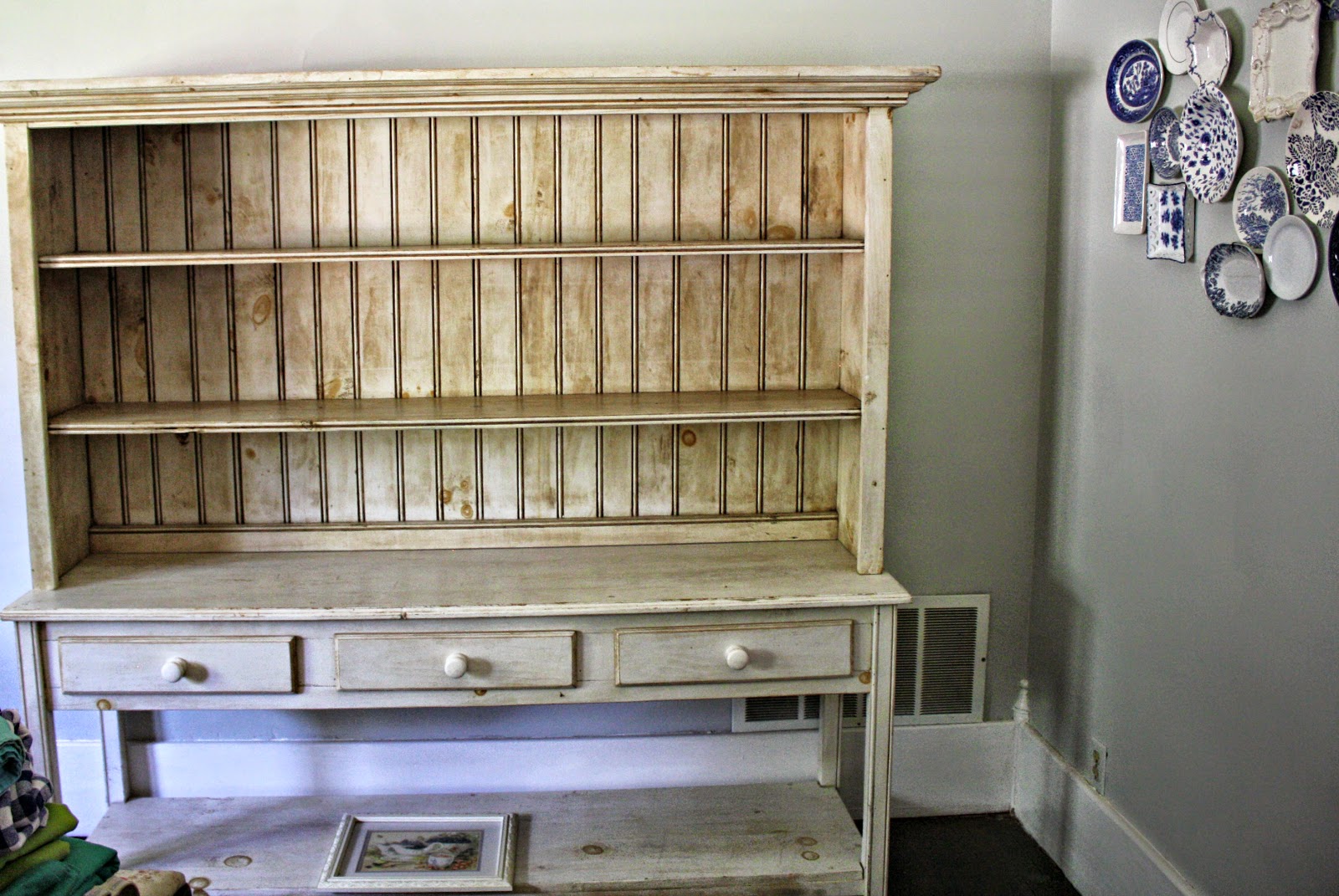 A couple of days before the 4th of July I decided I needed a new pillow. I have talked before about how little I sleep per night. This summer, for some reason, has been worse than usual. My 4 hour per night sleep routine has been even less. I blamed it on my pillow. So the Hubs and I were in OKC to eat. We were getting ready to head back home and Hubs said we should stop for my new pillow. I had not even thought of it, but thank goodness he did. We stopped at a small department type store that was close to where we were and I headed towards the "home" section to get my new pillow. But then I saw the huge sideboard/stepback cupboard and it stopped me in my tracks. 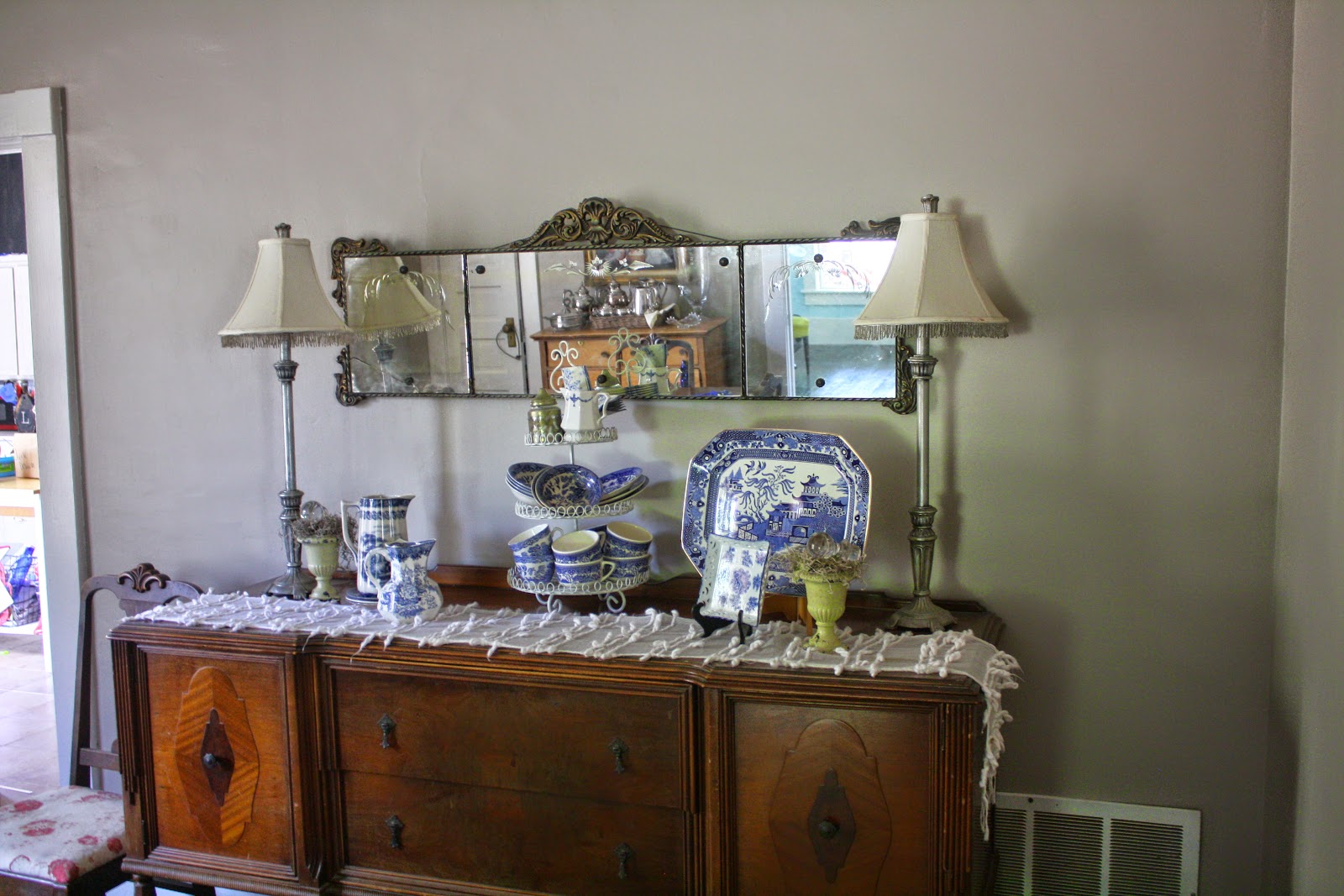 I looked around at the other furniture the store had for sale and spotted the price tag on most pieces. I could not find a price tag on the sideboard. Then upon closer examination, I started to think that the piece was actually a display model.....That was sitting right smack dab in the middle of the other furniture. A nice young salesman asked me if I needed any help. I told him I needed to know the price on the sideboard. He said it wasn't for sale, but was indeed a display piece. I had already thought, "Hmmmm...This store has about a million and a half dishes. Why would they NOT be using this piece to display some of them?"  So, I asked the nice young salesman to go and ask his manager how much the piece was. The nice young man (very polite I might add) assured me it was not for sale. I convinced him that if he wanted me to quit bugging him that he really should go and ask his manager. 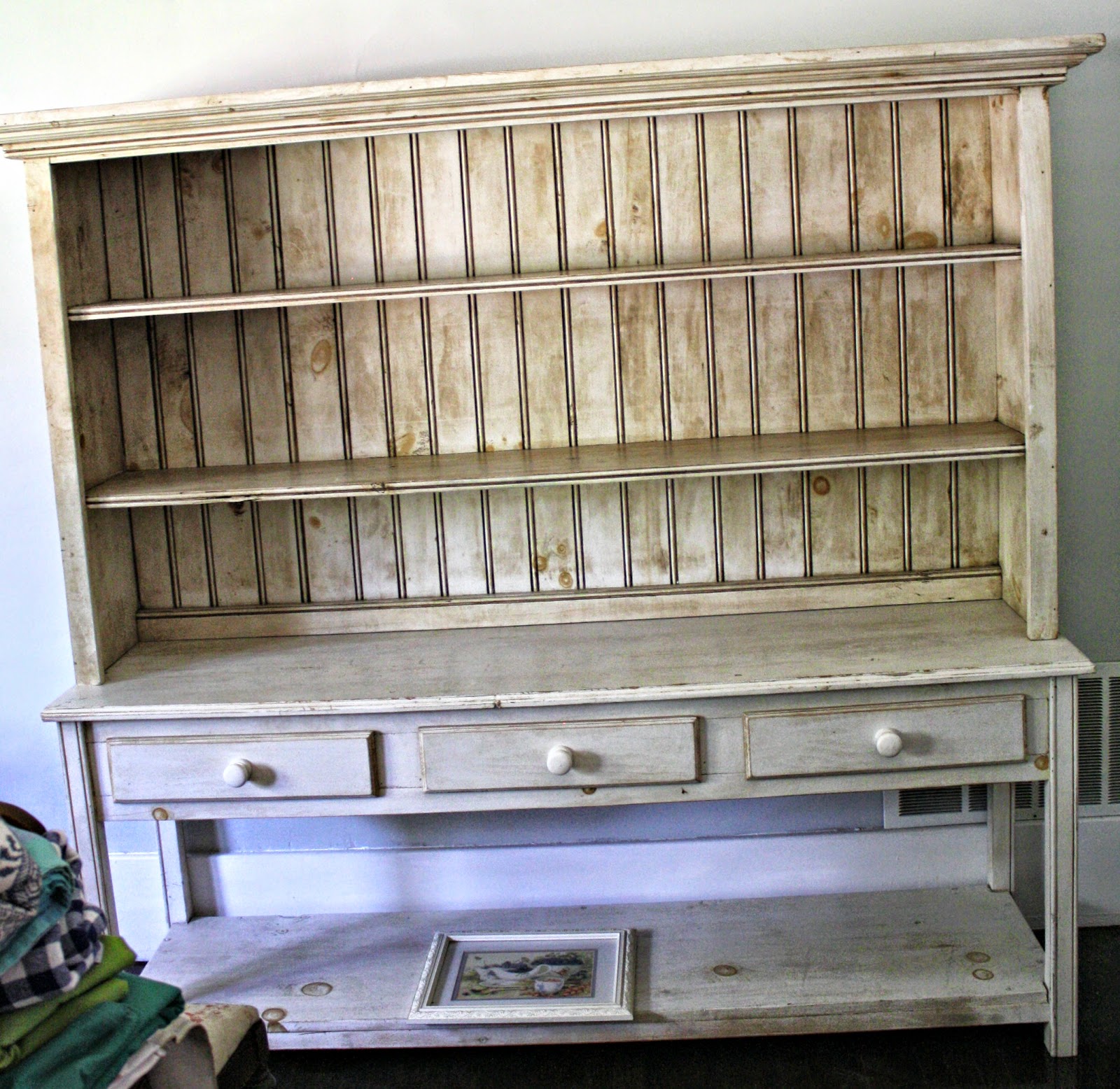 While the polite young man was finding the manager, I pulled out my handy-dandy tape measure from my purse and began measuring the piece. It was 7 feet long. It was solid wood (NO MDF!!). It was already painted antique white and distressed. It came apart in two pieces, so it would be easier to move.  It was perfect!! 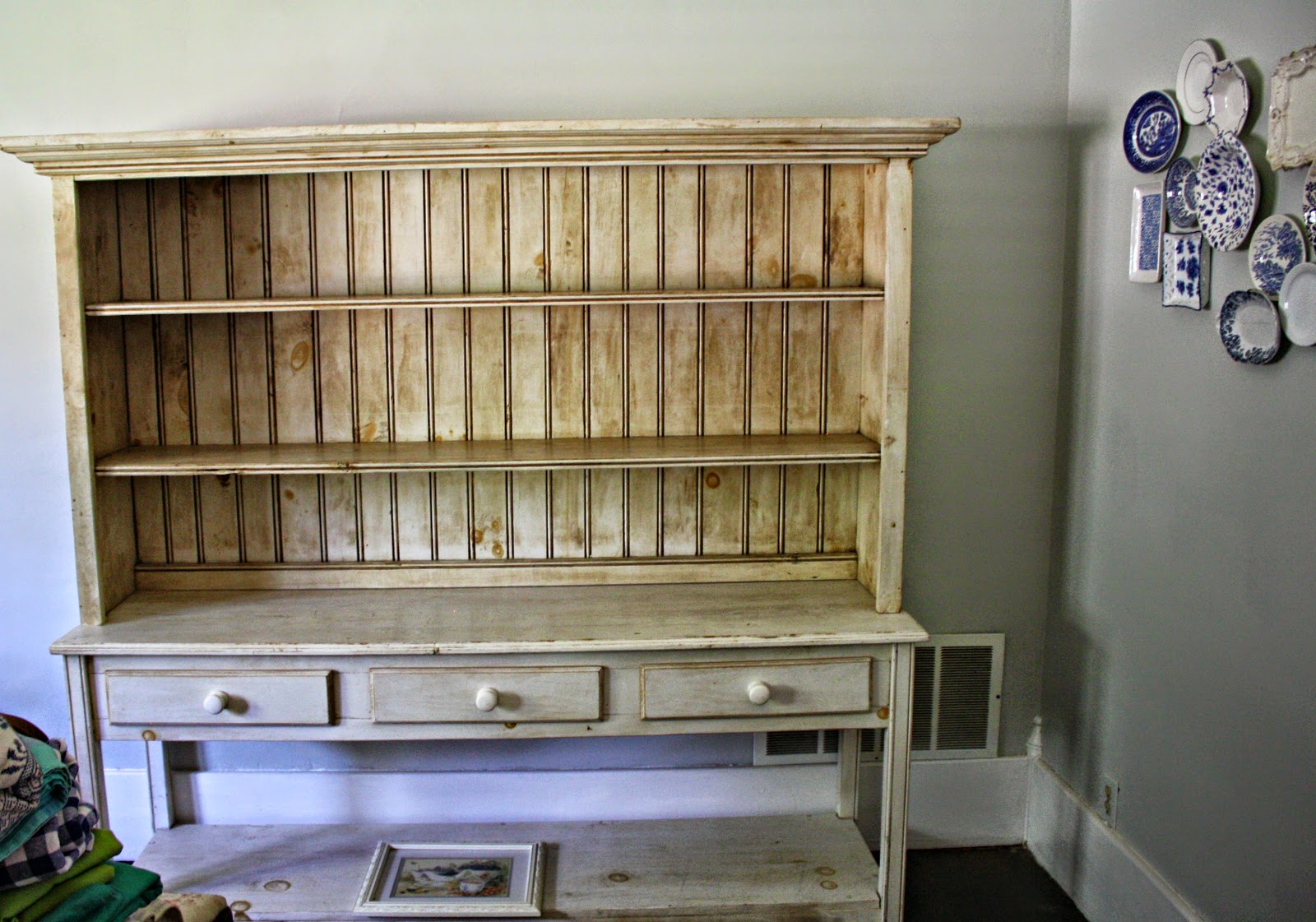 The nice young man came back to me and told me that I was right and it was indeed for sale. (I heard the angels singing.) I was ecstatic. I asked him how much. He had not thought to ask that question (!!!!?????!!!!!). So he went off again to find the manager (which I would later find out was actually the assistant manager). He came back and told me that it was either $330 or $350. The manager was gone and the assistant could not remember the price. I had already told myself that I would not go higher than $1200.00 Hahahahaha!!!  (Like I could afford that!!).  I told the polite young man that it was now officially SOLD, and that I would be glad to pay the full $350 and call it even. 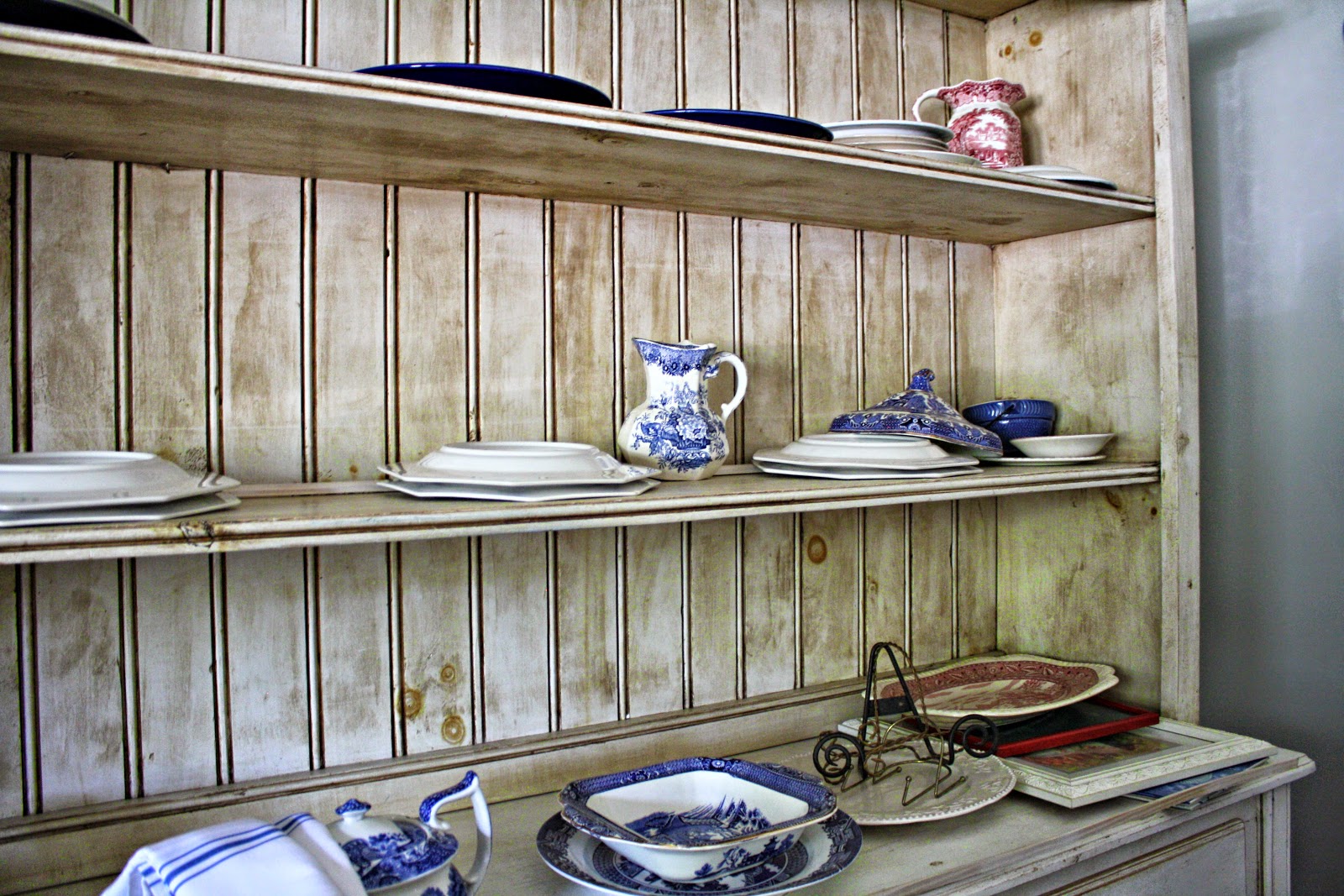 The polite young man left and this time he just brought the assistant manager back with him! (He was catching on!!) I told her that without a doubt I wanted the piece and I would be glad to pay the entire $350.00 right then and there. About this time, my Hubs finally found me in the store. I told him I had just purchased the giant sideboard. He looked me in the eye and said, "Good".  Really. "Good".  Then "okay".  Really, just "Okay".  I said to him, "I was prepared to chain myself to this piece if you had said no. What made you say yes so easily?"  And his simple answer was, "It looks just like you. It looks like something you would love."  Ohhhhh emmmmm geeeeee!!!  See what being married for years does for a couple????  Then AFTER he had said "Good" and "okay" I told him the price. He too was astounded. Then the assistant manager told us the bad news. We could only buy it when the real manager was there. And he was off the next day. I was going to have to wait 36 hours before I could pay for, and take the piece home. 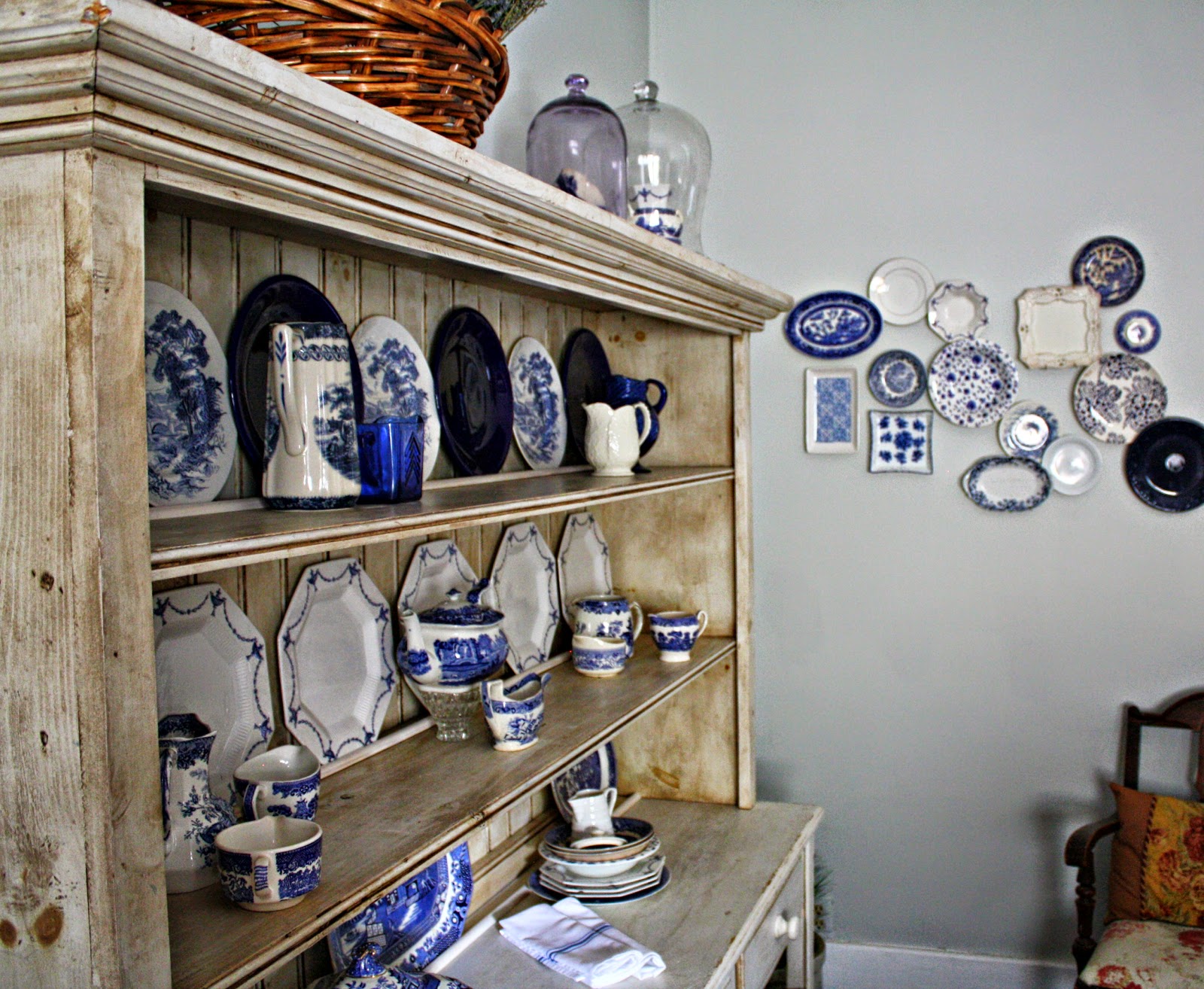 I about croaked!! I made her write out two big signs that said SOLD with my name on them and tape them to the piece.  I asked her to go and call the manager at home and tell him I had bought it, but she would not do that! She did make sure the signs were taped down well and she assured me the piece would be fine. She pointed out that it had sat there for several days and no one else had even realized it was for sale. So I begrudgingly left hoping and praying it would still be there 36 hours later, waiting for me to come back! I finally did find the pillow section and got several new pillows too!! (And they have NOT helped my sleep yet, by the way!!) In the meantime, on the way home I was talking a mile a minute. Literally. I decided I would take out the buffet we had had for 30 years (and it was old when we got it!) and put the sideboard in its place. (The buffet is pictured in the second picture above from an old photo. Look how much more room the sideboard takes up!)  So, I have been playing around with the massive piece. Yes, it was still there 36 hours later when I showed up first thing that morning.  I have no doubt I will rearrange it a million times, but for now I have it styled for summer. Those pictures I will share later this week. The above picture is however a sneak peek. And that my friends is the story of how a person goes in to buy a bed pillow and comes out with a 7 foot long sideboard!!